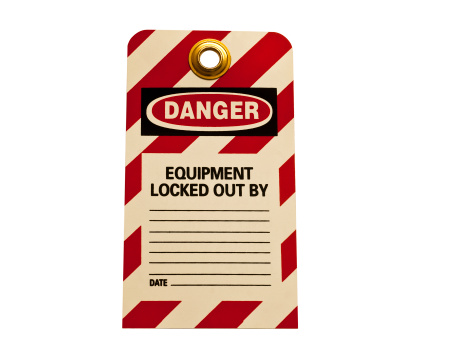 A common safety hazard in many workplaces, especially in the manufacturing sector, is the machinery and equipment workers use. Without proper safety measures, workers can get entangled in machinery and lose limbs or even die, especially when they’re trying to clear a jam or repair such machinery. That’s why in addition to machine guarding requirements, the OHS regulations also include extensive lockout/tagout (LOTO) requirements. To ensure that your workplace is in compliance with these requirements, here are answers to 12 frequently asked questions (FAQs) about LOTO.

A  To protect workers when they’re performing maintenance and repairs on machinery and equipment, you need to ensure that the equipment is powered off or in a “zero energy state.” But simply turning machinery off isn’t enough—you must ensure that no one is able to turn the power back on, either intentionally or inadvertently, while a worker is working on that equipment. To do so, the OHS regulations require you to lock out energized equipment so it can’t be powered back on until it’s safe to do so. And in some jurisdictions, you must also tag the equipment to warn workers that it has been locked out and by whom. Thus, locks physically prevent equipment from being turned on or operated, while tags are merely warning devices. (This chart spells out the requirements for lockout tags in each jurisdiction’s OHS regulations.)[/learn_more]

[learn_more caption=”Q What Kinds of Equipment Are Subject to LOTO Requirements?”]

A  The LOTO requirements generally apply to any equipment operated by electricity or another form of energy. In addition, the OHS regulations may include special LOTO requirements for “electrical equipment,” that is, equipment designed to generate, supply or transmit electricity. Such equipment can be particularly hazardous and so warrants additional safety measures.[/learn_more]

A There are various circumstances in which you must comply with the LOTO requirements, including:

A There may be limited exceptions to the LOTO requirements in each jurisdiction’s OHS regulations. For example, you may not need to lockout equipment if it’s disconnected from its power supply and its connection point is kept under the immediate control of the worker performing the repairs or maintenance at all times while work is being done or if the energy isolating device is under the exclusive and immediate control of the worker at all times while he’s working on the machinery.

In addition, when troubleshooting machinery or equipment, you may need it to be running in order to figure out what the problem is or the manufacturer may require it to remain operative while being serviced or repaired. So some jurisdictions have troubleshooting exceptions to their LOTO requirements. (This chart outlines such exceptions to the LOTO requirements under the OHS regulations in each jurisdiction.)

Insider Says: For more details on when locks are and aren’t required under the OHS regulations in each jurisdiction, see the chart in “Machinery & Equipment: How to Comply with Lockout Requirements,” July 2011, p. 1. And for more on troubleshooting, see “Machinery & Equipment: 5 Key Elements of a Troubleshooting Policy,” July 2013, p. 1.[/learn_more]

A Safeguarding and LOTO are similar ways to protect workers from being harmed by energized machinery and equipment. But there are differences:

[learn_more caption=”Q Do We Need Both a LOTO Policy and Procedures?”]

A Almost all OHS regulations require companies to have written LOTO procedures that cover the specific steps to be taken to make sure machinery or equipment can’t be turned on, intentionally or accidentally, while work is carried out on them. Such procedures should include detailed steps to be taken for work carried out by individual workers and by groups of workers (more on group lockout below) and be tailored to the specific equipment involved.

In contrast, the OHS regulations don’t generally require written LOTO policies. However, adopting such policies is a good idea and may be considered a best practice. A LOTO policy will typically cover:

[learn_more caption=”Q When Should We Update the Policy and Procedures?”]

A It’s critical that your LOTO policies and procedures are up-to-date or they won’t effectively protect workers. So revise the procedures whenever new equipment is introduced that’s subject to the LOTO requirements, when these requirements change or when machinery is modified in a way that impacts the LOTO procedures. And if you change the LOTO policy or procedures, make sure you retrain workers accordingly.[/learn_more]

[learn_more caption=”Q What Are the Requirements for the Actual Locks?”]

A Compliance with the LOTO requirements obviously requires the provision of locks. Workers who operate machinery or equipment that’s subject to your LOTO procedures should get individual locks that only they or a supervisor can unlock. So you shouldn’t use combination locks for LOTO purposes. The lock itself should identify the worker to whom it belongs with a unique mark or identification tag in case supervisors or co-workers need to contact that worker about removing the lock, such as in an emergency or at the end of a shift.[/learn_more]

A There are some circumstances in which LOTO is required but the use of individual LOTO procedures isn’t practical. In that case, the OHS regulations may permit you to use so-called “group lockout.” Group lockout is generally allowed when:

[learn_more caption=”Q Is There an Alternative if Group Lockout Isn’t Sufficient Protection?”]

A In some circumstances, a lockout procedure may be so complex that even group lockout won’t be sufficient to adequately protect workers. That’s why AB and NB permit employers to use what Alberta’s OHS law calls a “complex group control” procedure. Such a procedure may be appropriate due to the:

In both jurisdictions, employers must get first permission from the government agency in charge of enforcing the OHS laws before using a complex group control procedure.[/learn_more]

[learn_more caption=”Q Is Disciplining Workers for Violating LOTO Procedures Different than Other Infractions?”]

A As a general rule, you should discipline workers for violating any safety rules according to a progressive discipline program otherwise you’ll undermine your ability to argue due diligence later if necessary. But LOTO violations are considered very serious safety infractions by the courts and arbitrators. So you may be permitted to impose more stringent discipline on a worker who commits such a violation—and even fire a worker for a first offence.

Insider Says: For more information on disciplining workers for safety infractions, including those involving LOTO, watch this recording of a webinar by OHS lawyer Adrian Miedema. And give workers this handout to reinforce the importance of compliance with LOTO procedures.[/learn_more]

[learn_more caption=”Q Can We Be Held Liable if a Worker Violates LOTO Procedures?”]

A Yes. If a worker violates your LOTO procedures, the company can be held liable for violating LOTO requirements in the OHS regulations, especially if an investigation finds that the worker wasn’t properly trained on such procedures or that the procedures weren’t adequate. And OHS regulators also consider LOTO violations to be very serious and often impose substantial fines for such offences—event those that don’t result in serious injuries or fatalities.

Example: A worker was setting up a production line at a manufacturer’s meat processing plant. Noticing that slats underneath the conveyor belt were out of position, he lifted the belt with one hand and began to pound the slats back into place with the other. But he hadn’t locked out or otherwise disabled the conveyor belt. A co-worker pressed the start button and the conveyor belt began to move, pulling the worker’s hand into a sprocket. He sustained a broken finger and required a significant number of stitches. Although the worker had received training on guarding and lock-out procedures in general, he wasn’t trained on locking out the conveyor belt on the production line. The manufacturer pleaded guilty to an OHS offence and was fined $40,000 [Cargill Limited-Cargill Limitée, Govt. News Release, April 17, 2014].[/learn_more]

It seems like common sense for a worker to lock out machinery before working on it to prevent someone else from turning the machinery back on and exposing the worker to a number of hazards. But in a rush to, say, clear a jam and resume production, workers may take short cuts that put them at risk. That’s why the OHS regulations have LOTO requirements—and why you must ensure that your company complies with those requirements and adequately trains workers on your LOTO policies and procedures.