Skip to content
Spot The Safety Violation: Why Rollover Protection Is Important

Why do you think this compactor rolled over and how did the operator manage to survive? 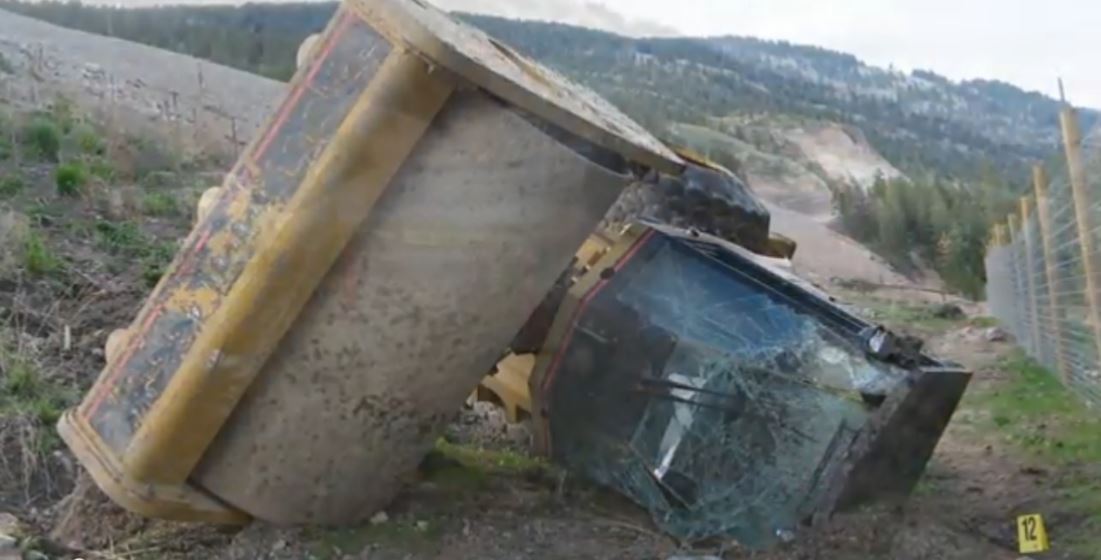 Many workplaces use various kinds of powered mobile equipment, such as forklift, backhoes, etc. This equipment can obviously endanger workers around it if the operator—and the workers—aren’t alert and careful. For example, it can run over an unaware worker who strays into its path. But such equipment can also endanger its operators, especially if it tips or rolls over.

For example, this still photo taken from a video from WorkSafeBC shows the aftermath of an incident in which a mobile vibratory soil compactor slid down an embankment, rolling over several times and seriously injuring its operator.

The subsequent investigation identified several factors that caused the incident:

Unsafe use of the equipment. The worker operated the compactor with part of the drum extended over the embankment, which created an unsafe condition where the drum could unexpectedly move laterally.

Use of the wrong piece of equipment for the task. The compactor was operated in an area that contained an open edge with grades measured at 52%, which is considered an area with a significant hazard of rollover. The employer chose to use a mobile compactor next to the steep embankment, contrary to the manufacturer’s instructions. There were safer alternatives that wouldn’t have put operators at risk.

Inadequate instruction. The worker was instructed to operate the compactor in a manner that contradicted the manufacturer’s operating instructions. Such instructions were thus inadequate to ensure the safe operation of this equipment.

2 KEYS TO PROTECTING WORKERS IN ROLLOVERS

Obviously, the employer involved in the incident depicted made a few mistakes that lead to the rollover. But it seems clear that at least some safety measures were in place that prevented the worker from being killed.

The goal is obviously to prevent rollovers from ever occurring. But because a rollover may happen despite your best efforts—and because the heavy equipment involved can easily kill its operator during a rollover—the OHS laws require employers to take certain steps to protect workers in that event. Following these two tips will help you protect your workers in a rollover:

Tip #1: Install ROPS on designated equipment. The main protection from rollover injuries is the installation of what are called operator or rollover protective structures (ROPSs). You should install ROPSs if your type of mobile equipment requires them under the OHS regulations, which often include a list of such equipment. Compactors, such as the one involved in the BC incident, are usually on this list.  You should also install ROPS if a hazard assessment of the equipment identifies rollover as a potential hazard.

Make sure that the ROPS you install on your equipment meets the requirements spelled out in the OHS regulations or any cited voluntary standards. For example, the ROPS may need to be certified by the manufacturer or a professional engineer as meeting the designated requirements. In addition, it may need to feature safety glass and have certain labels on it.

Tip #2: Provide seatbelts—and require workers to use them. The OHS regulations across Canada require powered mobile equipment to be fitted with seatbelts, which may also need to meet certain standards. Seatbelts will prevent operators from being thrown from the equipment in the event of an incident and possibly crushed by it.

If wearing a seatbelt when operating powered mobile equipment is impracticable due to the job, type of equipment or how it’s operated (such as from a standing position), you must provide an alternate safety measures, such as a shoulder strap, gate or screen.

Seatbelts are useless unless workers actually wear them. So require workers to wear seatbelts (or use the alternate measures mentioned above) whenever they’re operating powered mobile equipment.

In addition, make sure you regularly inspect seatbelts. Replace them either when they become damaged or worn or at least every five years. Damaged or worn seatbelts may fail during an incident and endanger the operator.

Example: In another BC incident, a skidder rolled over down a hill, killing the operator. The skidder was fitted with a ROPS and a seatbelt. The ROPS functioned as intended, but the seatbelt tore in half. The investigation found that the belt failed because it had been previously damaged.