Skip to content
Spot The Safety Violation: Would You Wash out Your Eyes Here?

Want to know a secret? Safe workers are more productive, profitable and efficient! Want to know another secret? Our members report an average of 45% reduction in accidents & incidents, 43% reduction in liability insurance premiums, ROI in less than 2 months, 150 hours saved/employee/year, and more. OHS Insider & HR Insider is your one-stop for expert legal advice, easy-to-implement tools, compliant policies, training, documentation and more. FIND OUT MORE...
Spot The Safety Violation: Would You Wash out Your Eyes Here?
Favorite Print Email

If you got something in your eye and needed to wash it out, why wouldn’t you want to use this eyewash station? 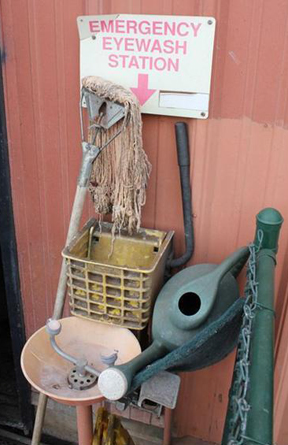 In a perfect world, workers wouldn’t get dust, wood chips, chemicals or other irritants in their eyes. Machinery and equipment would be designed to prevent such items from flying into someone’s eye or workers would be using proper eye protection. But workers sometimes forget to put on their safety goggles or face shields or simply walk past another worker doing his job and wham – some foreign body gets into one or more of their eyes.

In that case, workers should have access to an emergency eyewash station, fountain or equipment to flush out irritants from their eyes. In fact, the OHS laws generally require employers to have such equipment available if there’s a risk that a hazardous substance could get into or injure a worker’s eye.

But workers would have a hard time accessing the emergency eyewash station in this picture from the Naval Safety Center given all the equipment being stored right around it. Plus, the station looks quite dirty and probably isn’t even sanitary to use. (And no, the watering can isn’t a viable alternative.)

Here are 10 emergency eyewash station best practices that you can use to protect your workers’ eyes and sight:

1. Keep the doors open. Don’t place an emergency eyewash station behind a closed or locked door. Although the station may be used infrequently, remember that when it’s needed, someone’s vision is on the line—and every second counts.

2. Don’t hang the station at an angle. Doing so can interfere with the proper flow of flushing fluid and may force an injured person to stand in an uncomfortable position to flush their eyes properly.

3. Don’t block access. Avoid storing anything underneath, around or in front of an eyewash unit, which can block an injured worker’s ability to reach or stand comfortably at the station.

4. Watch the fluid’s temperature. Don’t allow the flushing fluid to become too hot or too cold. Storing flushing fluid in extremely hot or cold environments can cause its temperature to rise or fall outside of standards for tepid water. And flushing eyes with scalding or ice-cold solution can cause further damage to an already compromised eye.

6. Clean thoroughly after use. Don’t forget to clean, disinfect, rinse and completely dry the station after each activation, including its hoses, nozzles and nozzle covers (but not the sealed-fluid cartridges). Any lingering cleaning chemicals or particles may harm the next user’s eyes. When the wrong chemicals mix, the fluid may turn brown or another color and colored fluid should be used.

7. Don’t cover the station. Don’t place a plastic bag or other makeshift cover over the station to keep out dust or particles, which can hinder an injured person’s ability to properly activate the unit in a single motion and start the flow in one second or less.

8. Mind the shelf life. Avoid using expired flushing fluid. Like any standing water, eyewash fluid can grow bacteria that may be harmful to eyes. Be sure that someone’s responsible for checking expiration dates and refilling/replacing expired fluid according to the manufacturer’s guidelines, such as every two to three years for sealed-fluid cartridges and bottles. In addition, plumbed stations should generally be flushed weekly and tank-style fluid stations every three to six months.

9. Install the station correctly. Don’t install an eyewash station without carefully following the manufacturer’s instructions. Stations vary and have precise installation instructions to ensure proper performance, including installation height, the rate of fluid flow, required spray pattern and much more.

10. Don’t alter or tamper with the station. Again, the manufacturer’s instructions are the only ones that should be followed. Don’t try to re-route hoses, change nozzles or otherwise compromise the station’s performance.

For other first aid related information, go to the OHS Insider for: