Skip to content
Spot The Safety Violation: A Fire Extinguisher Only for Tall People

In the event of a fire or explosion, how tall do you think you’d have to be to access this fire extinguisher? 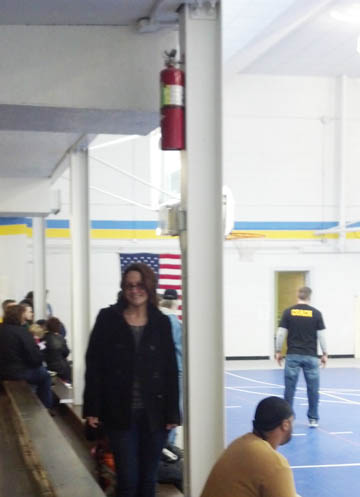 When it comes to emergency preparedness, one of the most basic pieces of safety equipment to have on hand is a fire extinguisher. But having extinguishers in the workplace is pointless if workers can’t get to them when needed.

The rationale behind the alarming location of the fire extinguisher in this picture from the US Naval Safety Center is anyone’s guess. If a fire broke out, only very tall workers would be able to easily and quickly access it. Other workers would need a ladder or step stool to reach the extinguisher. And finding a ladder and putting it in place can cost valuable time in an emergency.

Example: A welder in New Brunswick was welding a pipe in a warehouse from an elevated platform. When a fire broke out, there wasn’t a fire extinguisher nearby. By the time he found one, the fire had engulfed the warehouse—and a worker died. Lesson: Compliance with the requirement that a fire extinguisher be readily available where welding is performed could’ve saved this worker’s life.

Bottom line: Fire extinguishers need to be fully charged, inspected—and within easy reach of all workers.

The ABCD’s of Portable Fire Extinguishers

According to Fire Prevention Canada, fire extinguishers are storage containers for an agent such as a dry chemical, foam, carbon dioxide or water. They’re designed to put out small fires—not large ones.

Extinguishers are labelled A, B, C or D. Makes sure that your workplace has the right extinguishers for the appropriate types of fire likely to occur in it:

A multi-purpose dry chemical labelled ABC puts out most types of fires, including those involving wood, paper, cloth, flammable liquids and electrical fires.

Other important facts about fire extinguishers:

1. Pull the pin. Some units require the releasing of a lock latch, pressing a puncture lever, inversion or other motion.

2. Aim the extinguisher nozzle at the base of the fire.

3. Squeeze or press the handle.

For more information, tools and other resources for protecting your workers in the event of a fire or other emergency, go to the OHS Insider’s Emergency Preparedness & Response Compliance Centre for: