Climate change obviously impacts the environment. But it also impacts humans, including workers. In fact, according to the CDC, climate change can increase existing health and safety risks and create new ones. Impacts to workers can include the direct effects of climate change-related occupational hazards such as increased ambient temperatures, air pollution and extreme weather. In additional, indirect climate change-related occupational hazards are likely to occur from emerging industries (such as renewable energy, carbon capture and “green industries”), increased use of pesticides and changes in the built environment.

According to the CDC and NIOSH, these are some of the OHS risks that are affected by climate change:

Increased ambient temperatures. Higher temperatures or longer, more frequent periods of heat may result in greater heat stress, which may lead to more cases of heat-related illnesses such as heat stroke or heat exhaustion. There may also be indirect effects, including reduced vigilance regarding safety and increased risk of injury and irritability that may lead to carelessness.

Air pollution. Elevated temperatures can increase levels of air pollution including ground-level ozone. Outdoor workers have longer exposure to air pollutants, which may be linked to chronic health effects, such as respiratory diseases or allergies. In addition, the frequency and severity of wildfires is projected to increase, resulting in higher levels of particulate matter and other air pollutants.

Extreme weather. Extreme weather events or natural disasters such as floods, landslides, storms, lightning, droughts and wildfires are becoming more frequent and intense. Natural disasters may be associated with deaths, injuries and diseases. The impact of more frequent and intense weather events on mental health and stress is another consideration.

Workers involved in rescue and cleanup of workplaces after natural disasters are exposed to risky conditions, such as mould and electrocution. Extreme weather events may also cause damage to infrastructure and buildings, making workplaces themselves more hazardous. And disruptions to information technology could lead to standards of control not being applied or the inability to recognize hazards. Carbon monoxide poisoning may also be an issue if emergency generators are run with poor ventilation.

Diseases and allergies. Changing temperatures and shifting rainfall can affect habitats of vectors, pathogens, hosts and allergens. Increased prevalence and distribution of water-borne and food-borne pathogens could affect workers, particularly emergency responders and healthcare workers. Pollen may increase from earlier flowering and longer pollen seasons. Increasing numbers of hurricanes and floods could lead to more buildings with mould, which may lead to allergic as well as non-allergic or irritant asthma.

Increasing temperatures and carbon dioxide in the atmosphere may increase the growth and wider distribution of poison ivy and other poisonous plants. Changes in temperatures have also affected ticks and mosquitos, increasing their populations, extending their transmission seasons and expanding the seasons and areas they can be found. As a result, outdoor workers may be at increased risk for mosquito-borne diseases (such as West Nile virus) and tick-borne diseases (such as Lyme disease). Lastly, expanded vector ranges and the introduction of diseases not previously prevalent in the US or Canada (such as dengue and chikungunya viruses) will result in the increased use of pesticides, potentially placing workers at increased risk for exposure.

Industrial transitions and emerging industries. Climate change may impact various industries. For example, extreme weather events and damaged infrastructure and buildings may negatively impact the economy and employment, resulting in job insecurity and affecting worker health. Industries that offer “greener” technologies may grow and be a source of new employment, although they may also have occupational hazards that will need to be identified and eliminated or controlled.

Changes in the built environment. High temperatures increase the need for climate-controlled buildings. Building-related illnesses (such as sick building syndrome), may develop, especially in buildings with air conditioning, water damage or energy-efficient “tight” buildings with microbial-contaminated humidifiers or air handlers that use biocides. Tight buildings may also lead to radon buildup in work areas, such as smaller rooms, storage areas or offices. Many industrial settings, such as paper mills, aren’t climate controlled and so the higher temperatures resulting from climate change will increase heat exposure for these workers.

[box] Framework for the Relationship Between Climate Change & OHS

Below is a framework for considering the relationship between climate change and occupational health and safety. This framework outlines the multidisciplinary research needed to better understand workers at risk by hazard, occupation and geographic location. 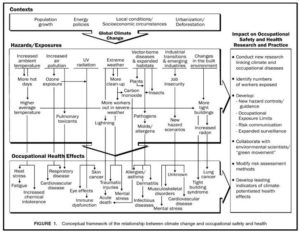