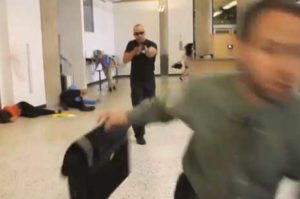 Unfortunately, the risk of an armed gunman entering your workplace and starting to shoot is higher than you may think. Active shooters may be disgruntled employees—or former employees—estranged loved ones of a worker or domestic terrorists trying to make a political statement. For example, in Oct. 2014, a gunman went on a shooting rampage on Parliament Hill in Ottawa, killing one person before being shot to death himself. In June 2012, a shooter went on a spree in a Toronto shopping mall, killing one and injuring seven. And in May 2014, a former employee of a mill in BC went to his old workplace and began firing a gun. He killed two people and injured two more before being apprehended. Employers have a duty to protect workers from workplace violence, such as these kinds of incidents. So would your employees know what to do if an active shooter appeared in your workplace?

It’s important to have a plan in place on what to do when an active shooter appears at the workplace. And as always, you must train all employees on this plan and the steps to take to ensure their safety in such a situation. The city of Houston, Texas and Homeland Security created a compelling video on handling active shooter events. Run. Hide. Fight.: Surviving an Active Shooter Event provides a good outline of how to respond to a gunman in the workplace. Watch the video before developing an active shooter response plan for your workplace. And show the six-minute video to employees as part of your training on that plan.

The Houston video recommends that employees take the following steps in response to an active shooter:

Step #1: Run. When an active shooter is in your vicinity, your first response should be to flee if there’s an escape path. That’s why you should always be aware of your surrounding environment and have an exit strategy if something should happen. Although you should try to help others escape, if possible, evacuate even if others disagree or choose to stay. When fleeing, leave your belongings behind. In addition, try to prevent others from entering the danger zone, such as warning people not to go into the building. And once you’re in a safe location, call for help.

Step #2: Hide. If you can’t get out safely, you need to find a place to hide, such as an office or closet. If you can’t find a safe room or closet, conceal yourself behind large objects that may protect you, such as copy machines. Your hiding place should:

Try to secure your hiding place, such as by locking or barricading the door. Turn off the lights—and your cell phone. You don’t want your phone to ring or even vibrate if the shooter is near. And do your best to remain quiet and calm while hiding.

Step #3: Fight. As a last resort and only if your life is at risk, fight. Whether you’re alone or working together as a group, try to incapacitate the shooter. Act with physical aggression—don’t be timid. Improvise weapons, using whatever items are handy, such as chairs, coffee mugs, tools, fire extinguishers, etc. And commit to your actions, that is, commit to taking the shooter down no matter what.

When law enforcement arrives, remain calm and follow their instructions. Keep your hands visible at all times so officers know you’re not the shooter and don’t have any weapons.

To make sure that your company’s efforts to protect workers from all forms of violence, including active shooters, are sufficient, go the OHS Insider’s Workplace Violence Compliance Centre, where you’ll find more information, videos and model tools on this topic, such as a workplace violence threat assessment checklist and an infographic you can download and post in the workplace. And at SafetyWorld.com, you can buy a SAFE System on workplace violence that includes posters, an outline for a safety meeting on violence, table tents to reinforce the message and employee cards.