Spot The Safety Violation: Nail Guns Are as Dangerous as Handguns 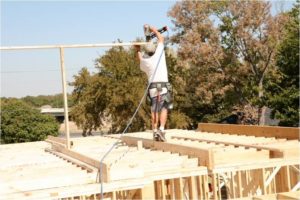 Is this worker in a good position to safely use a nail gun? Nail guns are very useful tools in construction and can make work go much faster. But they’re also very dangerous—as dangerous, in fact, as a handgun. So it’s especially important that workers follow safe work procedures when using this equipment.

For example, the worker in this picture from elcosh is in a very awkward position. He’s balanced on his toes holding the nail gun well above his head, making it difficult to firmly press the nose against the wood beam as he should. It also looks like his free hand is a little too close to the nail gun. Should the worker stumble or lose his balance, he could easily shoot himself in the hand—or worse.

Example: A construction worker in his 20s fell while carrying a nail gun. It shot a 3’ nail into his head, killing him.

10 Tips for Safe Use of Nail Guns

The OHS Insider can help you develop a power tool program for nail guns and other power tools that complies with the OHS laws. The site also has related tools and resources such as: