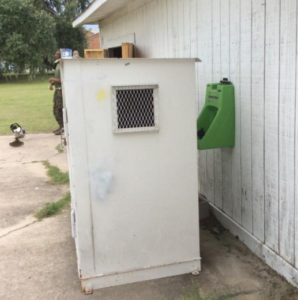 If you got a chemical, dust or other irritant in your eyes, how easily do you think you’d be able to find this eyewash station to flush out your eyes? Workers’ eyes can get injured on the job if chemicals, dust, particles, etc. get into them. And without quick action, their vision can become impaired. So the first step is usually to flush the worker’s eyes out to remove the irritants. But workers can’t take this key step if they can’t find an eyewash station when one is needed.

In this picture from the US Naval Safety Center, the eyewash station is practically hidden behind a locker for hazardous materials. If a worker’s eyes were blurry or burning due to an irritant, he may not be able to see well, making it even harder for him to quickly and easily locate this station.

Any delay in rinsing out a worker’s eyes can increase the likelihood of serious or even permanent damage to his eyes and/or vision. That’s why the OHS laws often bar employers from blocking access to eyewash stations.

To protect workers’ eyes and their vision, first provide them with appropriate eye protection, which can range from safety glasses and googles to full face shields, depending on the nature of the specific hazards. (Here’s a model eye and face protection policy you can adapt for your workplace.)

For more first aid related information, go to OHSInsider.com for: