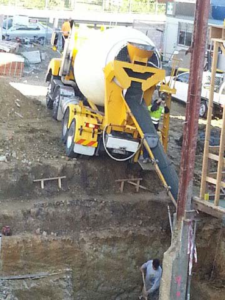 There are a number of safety hazards in this picture of an excavation—how many can you spot? Various workplace, especially construction sites, feature trenches and excavations. Such digs pose several kinds of safety hazards, from cave-ins to hazardous atmospheres. This picture, which is from the Victorian WorkCover Authority (Australia), illustrates a few of those hazards.

One of the most common—and serious—safety hazards posed by trenches and excavations is the risk of cave-ins or collapses. This hazard is the result of the removal of soil to make an opening in the ground, which “relaxes” the surrounding soil, increases the pressure on the walls around the opening and weakens them.

To prevent collapses and cave-ins, the primary safety measure is proper shoring of the excavation walls to support them. But in this picture, the walls of this very deep excavation don’t have adequate shoring or support. The few boards scattered at the walls would hardly prevent them from partly or completely collapsing. And if they did, the worker at the bottom of the trench could to be buried alive.

To prevent collapses and cave-ins, the OHS laws generally require trenches and excavations to have shoring depending on:

These factors will also determine the type of shoring required and other requirements, such as the spacing of support beams. Note that when heavy equipment, such as the cement truck in the picture, is used next to an excavation or trench, the shoring or bracing for the walls should be adequate to support the added pressure and weight of the equipment.

Trenches and excavations are really just holes in the ground. But if those holes are big and deep enough, they pose a fall hazard to both workers and equipment.

Although workers inside trenches and excavations are most at risk, other workers can also get hurt if they should fall into an unprotected trench. For instance, there are no barriers, guardrails or other fall protection around the edge of the excavation in the picture to keep workers or others from falling into it.

So to protect workers who are outside of the trench or excavation, most OHS laws require excavations to be covered or protected with a barrier, fence or guardrail to prevent workers, visitors and others on the surface from getting too close to the edge and falling into the dig.

In addition, it’s not uncommon to use powered mobile equipment such as cranes, back hoes and excavators around trenches. Such equipment must be kept far enough away from the edge of a trench or else it could fall onto the workers inside.

Example: The City of Sault Ste. Marie hired a crane rental company to provide an 80-tonne mobile crane and crane operator to assist in placing concrete structures into an excavation. The crane rolled into the excavation, crushing a city worker to death. The police originally charged three parties with criminal negligence but those charges were later dropped. The crane rental company was eventually convicted of an OHS violation and fined $70,000 [Millennium Crane Rentals Ltd., Govt. News Release, June 6, 2013].

As a result, the OHS laws typically require companies to erect barriers near the access points for powered mobile equipment that are high enough to keep such equipment from sliding or rolling into the excavation.

The OHS Insider has more information on the hazards and OHS requirements specific to trenches and excavations, including a trench/excavation inspection checklist.