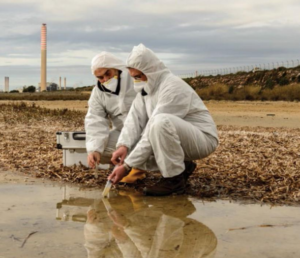 If you glance at this picture, you may think the workers are adequately protected. But when you look closer, what PPE errors have they made? This picture shows workers who appear to be taking water samples, perhaps to test for contamination. They clearly recognize the need for some PPE. For example, they’re wearing protective coveralls over their clothes. But they’re also making several key PPE mistakes.

First, both workers are wearing masks. However, the worker on the left as his mask pulled below his nose, so it provides no respiratory protection at all. (It also appears that one strap on his mask isn’t secured, which also impacts its fit and effectiveness.)

But the worker who’s incorrectly wearing his mask is wearing boots that appear to be impermeable, which could be critical if the water being sampled does contain a hazardous substance. It’s hard to see the other worker’s boots but they’re not the same as his colleague’s.

Lastly, neither worker is wearing gloves, which is surprising given that their hands are the body part most likely to be in contact with the possibly polluted water they’re sampling.

In general, use of PPE is a last resort. That is, the preference under the OHS laws is to try to eliminate safety hazards first.

If a hazard can’t be eliminated, the next step is to use engineering or mechanical controls, such as machine guards, to protect workers from that hazard. If engineering controls aren’t possible, you should next try administrative controls, such as lockout/tagout procedures. But if those controls aren’t sufficient to adequately protect workers, then workers can use appropriate PPE (see, PPE hazard assessment checklist).

If workers do need to use PPE, be sure that you comply with the requirements in your jurisdiction’s OHS regulations as to the specific type of PPE, such as:

Also, you should have a PPE policy that spells out the responsibilities of management, supervisors and workers as to PPE use. And train all staff on this policy.