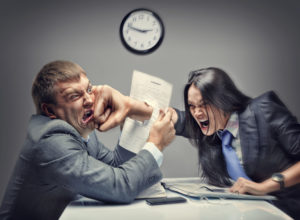 The workers’ comp system is designed to cover injuries suffered by workers in the course of their employment. For example, if a worker gets his finger caught in machinery while doing his job, that injury would be covered. But the system doesn’t cover injuries caused by a worker’s serious and wilful misconduct or if the worker’s actions remove him from the course of employment. So if the worker who injured his finger got hurt because he intentionally and in violation of safety rules removed a machine guard that was intended to prevent such injuries, his worker’s comp claim likely would be denied. The Alberta Workers’ Compensation Appeals Commission recently addressed whether injuries suffered in a workplace fight should be covered by workers’ comp. Here’s a look at its decision.

What Happened: A worker who was living in a work camp had his personal truck there because the start of his scheduled leave didn’t coincide with transport provided by the employer. After his last shift before his leave, the worker and his best friend (who was also a co-worker) were drinking beer in the worker’s truck in the camp parking lot when they were joined by another co-worker and the worker’s foreman. The foreman, who’d also been drinking, insulted the worker about how much money he was making, taunted him and told him not to come to work. The worker asked the foreman and the second co-worker to get out of the truck, which they did. The foreman again told the worker not to come to work the next day. The worker got out of the truck and he and the foreman got into a fight. The worker suffered numerous facial injuries, including a fracture that required surgery; the foreman was unhurt. The foreman started the fight and was arrested for assault. The worker’s claim for his injuries suffered in the fight was approved, but the employer appealed.

What the Commission Decided: The Alberta Workers’ Compensation Appeals Commission ruled that the worker’s injuries were covered by workers’ comp.

The Commission’s Reasoning: The Commission found that the fight happened at a time and place consistent with the obligations and expectations of employment. The worker was allowed to park in the work camp’s lot and, although he’d started his leave at the time of the fight, he was still entitled to stay at the camp. He also had no reasonable alternative to living at the camp. The Commission noted that because of the nature of a work camp, the worker was exposed to the presence of his foreman in a workplace environment even when he wasn’t working. Thus, the worker’s injury occurred while he was on the employer’s premises and that he was there at that time for employment reasons.

The Commission acknowledged that before the fight, the worker had been drinking alcohol in his truck with his friend, which was not for the employer’s benefit. But the consumption of alcohol wasn’t the sole cause of the fight—disagreement with the foreman about workplace issues was an additional cause. The foreman told the police that he and the worker were discussing workplace issues. The worker’s friend also said the foreman was goading the worker about work issues. And the worker said the conversation was a continuation of the badgering he’d experienced from the foreman on the job that week. The WCB’s policy is not to provide coverage to a worker who’s injured while participating in a fight over a personal matter. Because the Commission found that the fight in this case involved a heated discussion about the workplace and work issues, the worker’s injuries resulting from that fight weren’t primarily caused by serious and wilful misconduct and thus were covered by workers’ comp [2016-0453 (Re), [2016] CanLII 44231 (AB WCAC), July 15, 2016].

You wouldn’t think that if an off-duty worker gets drunk and into a fight—even one with a co-worker—his resulting injuries would be covered by workers’ comp. After all, how could such a fight reasonably be considered to have occurred in the course of employment? The Commission in this case focused on two key factors. First, it found that the worker was essentially a “captive” at the work camp. Thus, he was exposed to the hazard of co-workers, such as his foreman, even when he wasn’t working. Second, the fight was about work-related issues, not personal ones. The Commission relied on an WCB policy that specifically addressed coverage of worker injuries suffered in a fight. That policy states that workers’ comp won’t cover a worker’s injuries suffered while participating in a fight over a personal matter. For coverage, there must be a connection between the employment and the dispute, which led to the fight. For the Commission, the location of the fight and the work-related nature of the disagreement outweighed the fact the injured worker was actually on leave at the time of the fight and that both parties had been drinking. Bottom line: Decisions on workers’ comp coverage of injuries suffered in fights or other atypical situations are very fact specific.