You Make The Call: Do Lockout Work Controls Provide Protection Equivalent to Energy-Isolation? 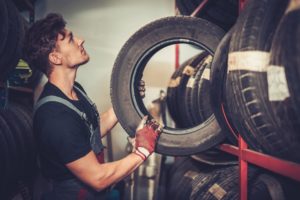 OHS regulations frequently give employers leeway to use alternative safety measures when required engineering controls aren’t “reasonably practicable” to deploy—but only as long as those alternatives provide equivalent or greater protection. The following scenario, which is based on an actual lockout case from Alberta, illustrates key principles to keep in mind when using alternative measures at your own workplace.

An Alberta tire shop worker ordered the driver of a semi-truck with a flat tire to inch his vehicle forward so it could be repositioned on the platform. Neither he nor the driver realize that a co-worker was underneath the vehicle jacking up the front wheels. The victim suffered serious injuries and the shop owner was charged with a lockout violation.

As in every other jurisdiction, Alberta OHS laws (OHS Code, Sec. 212) contain lockout provisions requiring employers to ensure that workers don’t service vehicles, machinery or equipment unless and until the equipment to be serviced comes to a complete stop and either:

All of the policy requirements were implemented except for one: The truck wasn’t isolated from its power source. But the owner had what it thought was a compelling explanation: The manufacturer of the truck neither designed nor provided an energy-isolation device for the vehicle. And the Crown conceded that it wasn’t reasonably practicable for the owner to get one from a third party.

While the owner might have had a good explanation, the fact is that an energy-isolating device wasn’t used to service the truck; and the alternative lockout measures that were followed didn’t provide protection equivalent or greater to the use of such a device. Result: The owner was guilty of a lockout violation.

But the owner argued that the first procedure created explosion risks if the battery cables got mixed up; and the second alternative was also risky if the driver gave the worker the wrong or a duplicate key. In addition to prevailing on these points, the owner was also able to show that there was no industry standard on how to handle the key exchange.

Having shot down all the alternatives, the court was faced with a stark fact: Nobody could demonstrate what alternative procedure would have been at least equally safe as using an energy-isolating device in this situation.

Regrettably for the owner, though, that didn’t amount to victory. It wasn’t up to the prosecution to point to a specific equivalent measure, the court reasoned. All it had to do was show that the method the owner did use didn’t measure up to the equivalency standard.