You Can’t Predict an Earthquake, But You Can Prepare For One 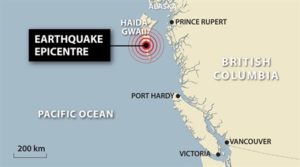 As the recent disaster in Haiti has shown, earthquakes leave a path of destruction and chaos in their wakes. The US Geological Survey says an earthquake strikes somewhere on Earth every 11 seconds and an estimated 10,000 earthquake-related deaths occur worldwide every year.

Most earthquake deaths involve victims being crushed under collapsed structures, but people also die in tsunamis (killer waves stirred up at sea that come ashore), mudslides, fires and floods.

Many populated areas of North America sit on high-risk earthquake zones and survival often hinges on being prepared.

[box] A powerful earthquake hit B.C.’s Haida Gwaii over the weekend, while no major damage was caused by Saturday’s 7.7-magnitude quake, which was considered one of the biggest in Canadian history, tsunami advisories along the B.C. coast and in Hawaii were issued, and dozens of aftershocks were still felt throughout the province on Sunday. [/box]

You can’t predict when an earthquake might occur, but you can take these steps to protect yourself at work and home:

What Should I do During an Earthquake?

What to do Once the Quake Ends

If you live in an earthquake-prone area, you can’t be nonchalant about your safety. Planning is critical in dramatically boosting your odds of surviving a strong earthquake.