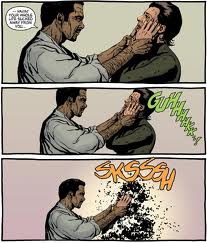 Would touching another person’s face in an argument (hands were put on either side of the other person’s face to get their attention) be considered violence, or would that fall under harassment?  I’m thinking it’s more harassment as the person doing the touching wasn’t exercising “physical force.”  It seems more like “conduct against a worker that ought to reasonably be known to be unwelcome.”

The answer all depends on how the law in your jurisdiction defines “violence” and/or “harassment.” For example, the OHS Act in Ontario defines “workplace harassment” as “engaging in a course of vexatious comment or conduct against a worker in a workplace that is known or ought reasonably to be known to be unwelcome” and “workplace violence” as:

a) “the exercise of physical force by a person against a worker, in a workplace, that causes or could cause physical injury to the worker;

b) an attempt to exercise physical force against a worker, in a workplace, that could cause physical injury to the worker; or

c) a statement or behaviour that it is reasonable for a worker to interpret as a threat to exercise physical force against the worker, in a workplace, that could cause physical injury to the worker.”

The Ontario Ministry of Labour gives examples of each type of conduct. For instance, it states that shaking a fist in a co-worker’s face would be considered violence. It also explains that violence requires the application of physical force but not necessarily the intent to cause harm. Given this information, it seems more likely that putting your hands on either sides of a worker’s face would be considered workplace violence as opposed to harassment as it does involve the application of some degree of physical force to hold the worker’s head in place.