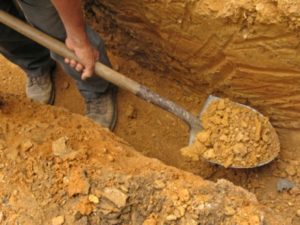 A company was installing water and sewer lines at a residential construction site, which required the digging of trenches. One trench was about 10-11 feet deep, its sides weren’t sloped and excavated material had been piled about three feet (one metre) from the trench’s edge. Although a shoring box was available, its dimensions weren’t sufficient to shore this excavation. A worker entered this trench to clear dirt away that had fallen onto a pipe, despite other workers’ urging to the contrary. Meanwhile, the supervisor was sitting in a truck completing paperwork and didn’t see or instruct the worker about entering the trench. The side of the excavation collapsed, burying the worker up to the chest. A worker, the supervisor and two responding police officers jumped into the trench to try to free him, but the commander of the responding fire department ordered everyone out of the excavation. Moments later, a second cave-in completely buried the worker, who died. An MOL investigation found that the company had no documented training of its employees on that crew relating to the hazard of working in trenches or the legal requirement for the use of shoring boxes if entering an unsloped trench. The company pleaded guilty and was fined $75,000 [Utility Force Inc., Govt. News Release, Oct. 12, 2016].