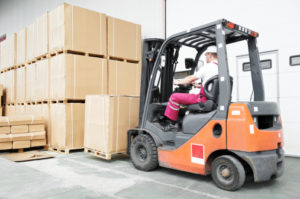 Three workers were at a table, loading parts onto a rack in an area known as the line load. A forklift operator was moving material in the line load area. The raised forks caught an edge of the second-level bins in the first row. When the operator raised the forks, he realized that bins in the first row were also being lifted. He started lowering the forks and first-row bins, causing the stack of bins to wobble and fall. Bins fell on the workstation of the workers at the parts table, one of whom was killed after being struck and pinned under the fallen bins. Under the company’s safety rules, the workstation should’ve been at least 30 feet from the stacked bins. But at the time of the incident, it was 16.5 feet from the stacked bins and directly within the fall zone. The company pleaded guilty to failing to ensure that materials were transported, placed or stored so they can be removed or withdrawn without endangering any workers’ safety. The court fined it $175,000 [Canadian Electrocoating Ltd., Govt. News Release, May 25, 2016].