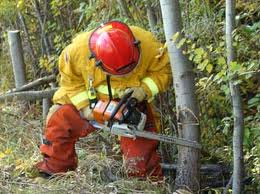 A worker at a manufacturing plant was being trained on the use of a machine that deburrs metal parts used in making chains for chain saws. He loaded both barrels on the machine and ran it through its usual 30-minute cycle. When the cycle was complete, the trainer checked the metal parts and determined that they were bad. At the trainer’s direction, the worker added water and re-ran the cycle. After the second cycle, the trainer opened the first barrel without incident; the worker began to open the second barrel by removing the screws on a clamping bar. As he loosened the second screw, he was struck by a blast of hot water and steam and suffered burns to the abdomen and legs. The plant pleaded guilty to a guarding violation and was fined $60,000 [Blount Canada Ltd., Govt. News Release, Dec. 11, 2013].