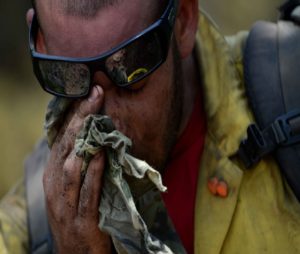 Trucker’s refusal to drive a cement truck with a broken air conditioning on a blazing hot July day is reasonable. The trucker’s fear for his personal safety was genuine and well-founded even if it was later shown to be mistaken. “The threshold for finding a ‘reasonable cause to believe’ danger exists is necessarily low,” the federal arbitrator explains.

Hotel doormen are justified in refusing to wear heavy polyester Beefeater suits that restrict circulation at neck and knees in oppressive hot weather conditions. Lack of openings in suit restrict heat transfer through radiation, convection and evaporative cooling. The doormen have to work outside away from the air-conditioning and are expected to perform manual labour such as carrying guest’s suitcases, the arbitrator reasons.

A railway cook is justified in refusing to work in an un-air-conditioned dining car. The cook had a note from his doctor advising him to avoid extreme heat. A railway safety officer didn’t check the heat in the kitchen; but he found the refusal unjustified because the cook hadn’t even bothered to report to work before refusing. The Canada Labour Board reversed the ruling saying the safety officer should have worried more about the inside of the kitchen and less about how the cook handled the dispute.

An electrician in a paper mill refuses to work because of extreme heat. The union gets involved and the case turns into a grievance by workers demanding extra pay under the collective agreement because they have to work in “abnormal conditions.” The mill claims the work is hot but not “abnormal.” The court disagrees and cites detailed WBGT (wet-bulb globe temperature) readings in concluding that the work is dangerous and worthy of extra pay for “abnormal” conditions.

The chef on a train doesn’t want to work in a hot dining car on a return trip from Winnipeg to Vancouver claiming she’s fatigued and overheated. She has only 4 hours—2 hours less than normal—to recover after getting into Winnipeg. The kitchen is hot and the stove ventilation fans aren’t working right. But the chef decides to tough it out. She works the trip and files a grievance later. The Canada Labour Board rules against her. By the time she initiated the refusal, the train was long gone and there was no way the safety officer could check it out.

Three Ontario steel workers refuse to work on a ladlemen’s platform because they say it’s too hot. The plant installs fans and offers alternative work. But the workers won’t budge. The arbitrator finds the refusal invalid. While “conditions were very unpleasant,” the workers’ didn’t have “reasonable grounds to believe” that they were subject to any unusual danger.

An airline ramp attendant has no justification for refusing to handle baggage in the cargo pits of a military plane. The pit is hot. The attendant, who’s supposed to wear coveralls with large openings around the wrists and ankles, claims to be afraid that fiberglass dust will get on his skin, react with the heat and cause rashes. The arbitrator doesn’t buy it. Refusals are designed to protect against immediate dangers. The attendant had been working in the pits and getting rashes for 12 months. That was unfortunate; but it wasn’t the kind of immediate hazard justifying a refusal.

A Manitoba rail yard worker refuses to scrub locomotives in the August heat because he’s afraid of getting heat stress. The railway wants him to wear a black, unvented poncho; he wants to wear a Tyvek suit. An expert testifies that the poncho stems air circulation and increases the risk of heat stress. The Tyvek suit is much more comfortable. But it doesn’t protect the worker’s skin against oil and contaminants as well as the poncho. So, the arbitrator finds that the worker must wear the poncho and take frequent breaks to deal with the heat.