Why It Matters: The Human Story Behind a Worker’s Combustible Dust Death 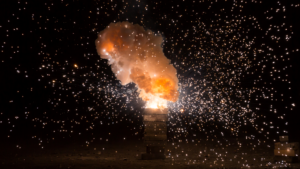 A reminder of why workplace fatalities are so much more than statistics.

281 combustible dust incidents between 1980 and 2005 led to the deaths of 119 workers, injured 718, and extensively damaged numerous industrial facilities.

This statistic, which comes from an OHS agency’s “Combustible Dusts” website, is pretty sobering, don’t you think? But while 119 fatalities will get an OHS director’s attention, it’s just a number that doesn’t tell us anything about the human aspects of dust explosion deaths, like:

Putting a Human Face on an Emotionless Statistic

To feel the human grief “combustible dust incidents” inflict, we must tell the stories of the individual victims. The best place to turn for these accounts is the family and loved ones the victims leave behind. Sadly but understandably, though, many families prefer to keep their stories and anguish private.

But sometimes families do share their stories and allow us to see the victim not as a statistic but a real-life person. Thanks to these families, we do know the story of at least one of those “119 workers” killed in dust explosions. His name is Shawn Boone and he was killed in October 2003 as a result of burns suffered in dust explosions at the Hayes Lemmerz cast aluminum wheel fabricating plant in Huntington, Indiana. He was just 33.

Shawn’s sister, Tammy Miser, has worked tirelessly to tell Shawn’s story and reach out to the families of other victims. She serves as the President of the non-profit United Support and Memorial for Workplace Fatalities (USMWF). If a love one has been killed or injured in a workplace incident or if you simply care about work safety, I strongly encourage you to check out the USMWF website.

What follows is the account of Tammy and other family members of Shawn’s death and its devastating impact on their own lives.

One Death, Many Losses, By Tammy Miser

The phone rang late October 29, 2003. I was nearby and heard Mark say, “There was a blast at Hayes Lemmerz.” I immediately thought “not again” then my mind switched to Shawn. “Oh my God, it’s Shawn, it’s Shawn, isn’t it?”

Jeff (a co-worker and friend) stayed with Shawn until he was rushed to Fort Wayne. Unable to contact family members, Mark called the St. Joseph hospital and found that they were treating a young unidentified male with no body hair and third degree burns over most of his body. Ultimately Shawn was identified by apparent weight and body structure alone.

My family drove 5 hours. All the while, I was thinking to myself, praying to myself it wasn’t Shawn and feeling sorry for the family of whoever that burn patient was. Arriving at the hospital, my heart sank and as I walked in, I felt my legs give way. My mother was waiting at the elevators to warn us that Shawn was barley recognizable and led the way to his room.

On the way to the room, we the hospital Chaplain, who expressed his condolences and cautioned us about Shawn’s war-like condition. I thought to myself, “Shawn is a tough cookie; he’ll do fine; I’ll take him home and care for him”. Walking in, I saw Shawn’s face peeking out of the blankets. I gave everyone a hug and gained the courage to confront Shawn. My God, he was swollen and his face was splitting but I could still tell it was him. I could still see his cute little nose and the remnants of his light red eyebrows. I started to lift the blankets and my mother stopped me. The doctors had refused to bandage his body; they told her there was nothing left to save.

Mom proceeded to tell me they had waited on us. Waited on us for what, I wondered? They planned to take Shawn off his breathing apparatus. I didn’t want them to take Shawn off. I loved him, I would take him home, I would take him if they had to take his arms and legs and I couldn’t believe they would even suggest that. I knew Shawn wouldn’t want to live that way but I didn’t care. Maybe he changed his mind or maybe he didn’t know how much we all loved him or how much we would miss him.

We did let Shawn go that morning. It was the hardest thing I ever had to do. I still feel the guilt of killing my brother; he may have been that one with the power to overcome and we did not give him that chance.

How did this happen?

Shawn and a couple of others had gone in to relight the furnace (this was normal for Hayes because they had fires on a daily basis) and they all decided to stick around a few minutes to make sure everything was okay. Things seemed fine, so they went back to gather tools. Shawn was directly behind the furnace with his back toward the furnace when the first explosion occurred.

Some stated that Shawn got up and started walking toward the doors (this can’t be confirmed). Then there was a second and more intense blast. The heat from the blast was hot enough to melt copper piping (1084.62 °C/1984.32 °F). Shawn did not die instantly like one would think. He lay on the building floor smoldering while the aluminum dust continued to burn through his flesh and muscle tissue. The breaths that he took while in the building burned his internal organs. Thank God, the blast took his eyesight. My brother had no nerve endings and was a fleshy carcass. Shawn was still conscious and asking for help when the ambulance took him.

The Kind of Person Shawn Was

Shawn was 33, never married and had no children. He was a great host, loved company and would do anything for anyone. Shawn enjoyed his nieces and nephew; he loved to entertain them buying a pool and an old tractor for their entertainment. He bought my oldest daughter her first car and took her out driving many times. He was especially thrilled when I had my son calling him “The Boy”.

Shawn was proud of his county home, his English bulldog (Duchess) and the fact that he was going back to school. Shawn took pride in everything he did and enjoyed life to its fullest. He enjoyed football, racing, model trains and digging things up from anywhere to see if they could be fixed and given to someone in need. Shawn was always trying something new just to see if he could do it and was childlike in his excitement. Shawn was a kind and loving son, brother, uncle and friend

Shawn’s employer would not return calls and/or mail, probably because they had been advised by their lawyers to have minimal contact. IOSHA (Indiana OSHA) issued Safety Orders alleging that Hayes Lemmerz International-Huntington, Inc. violated the Indiana Occupational Safety and Health Act. The fines totaled $42,000, representing seven serious violations, to be paid to IOSHA in three payments of $14,000, with the last payment being made no later than 60 days past May 10, 2004. Hayes Lemmerz was also ordered to make a donation to the St. Joseph burn unit.

OSHA concluded Hayes Lemmerz did not show plain indifference or intentional disregard in Shawn’s case. They came to this conclusion by consulting with the Labor Board and lawyers. Indiana workers or their surviving family members cannot sue their employers in civil court but may bring a claim before Indiana Workers Compensation Board and have a civil law judge review the case and determine a financial settlement. Shawn was not eligible for any such a payment because he was unmarried and had no children.

All these decisions about my brother’s death were made without one word to his family or any input from us. Shawn valued higher education and children; I felt he would have rather a donation be given for college scholarships. There are still no new or planned regulations for flammable dust and there were no moneys paid out in Shawn’s behalf making it cheaper and easier to kill someone than it is to fix an issue.

A workplace death is so different from any other. Normally, if someone is killed you know someone is responsible, they will go to trial and be held accountable. In a workers death, there is almost never any accountability.

Conclusion: One Death, Many Losses

5,559 workers were killed in 2003. How many people’s lives were altered in just that one year? Shawn’s death brought over 300 to his funeral. He touched many in the 33 years he lived. Who knows what gifts were taken from them. What I do know is that out of one death comes many losses. Thank you for listening.