When Does a Mistake Excuse Liability for an Environmental Violation? 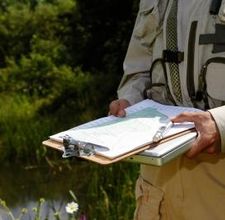 A property owner hires a land surveyor to file an application for an onsite sewage disposal system. The surveyor checks the land’s slope using his sight level. Based on its readings, he concludes that the slope is a fairly steep 20%+ and submits that information on the application. A contractor working on the property raises concerns about the actual slope, which seems minimal. So a government inspector audits the site and determines that the slope is actually less than 5%, a very gentle slope. The surveyor is charged with knowingly providing false information on the application in violation of Nova Scotia’s Environment Act. He argues mistake of fact, claiming that he relied on the reading from his sight level, which apparently was wrong.

Should the court find the surveyor guilty of the violation?

B.  Only reasonable mistakes of fact are a defence to an environmental violation and the surveyor’s mistake wasn’t reasonable.

This scenario is based on a case from Nova Scotia. Another surveyor testified at the trial that there was no place on the property where the slope was 20%. In fact, the accused surveyor himself acknowledged that he immediately realized his mistake as to the slope when he later returned to the property. But he still argued mistake of fact, claiming that he’d relied on the accuracy of his sight level.

The Nova Scotia Provincial Court convicted the surveyor. First, there was no evidence that the sight level was broken and thus the source of the surveyor’s mistake. Second, in evaluating a mistake of fact defence, the test is what a reasonable person in the same situation and with the same knowledge as the defendant would have believed. The court noted that there’s a big difference between a relatively gentle 5% slope and a steep 20% slope. A reasonable person walking on the property would have felt the difference and immediately questioned the accuracy of the reading from the sight level. As a result, the court concluded that even if the surveyor’s mistake was honest, it wasn’t reasonable and so wasn’t a defence to the violation.

A is wrong because mistakes of law are never a defence but mistakes of fact can be a defence. If a defendant honestly and reasonably believed in a set of facts that turned out to be wrong but, if they’d been right, would have made its act or omission legal, it won’t be held liable. The idea is that companies shouldn’t be penalized if they thought they were complying with the law and had no reason to suspect that they actually weren’t.

C is wrong because the surveyor’s reliance on the sight level, under these circumstances, wasn’t reasonable. In general, you can rely on equipment to comply with environmental regulations, provided that such equipment is working properly. Here, the surveyor should have immediately realized that the sight level’s reading was off given the big difference between a 5% and 20% slope. And for a mistake of fact to be a defence, it must be both honest and reasonable.

D is wrong because given the big difference between the slope reading he submitted and the actual slope of the property, the surveyor either knew or should’ve known that the information he provided on the application was inaccurate.