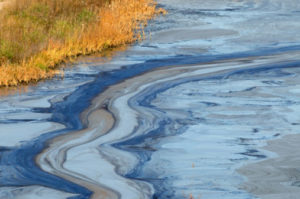 A company facilitated the development, construction and commissioning of four run-of-the-river hydroelectric generating facilities on the Kapuskasing River, including the Big Beaver Falls Generating Station. The MOE received a report of a spill of 5-100 litres of hydraulic oil into the Kapuskasing River from this station. Ministry staff attended the site and found that the amount of oil spilled was more than had been initially reported. The discharge likely occurred after a turbine was shut down for service. About 1,700 litres of oil was recovered from the river and as much as approximately 701 litres of oil could’ve escaped downstream of the facility. The company pleaded guilty to violating the Ontario Water Resources Act and was fined $120,000 [Hydromega Services Inc., Govt. News Release, Dec. 15, 2016].