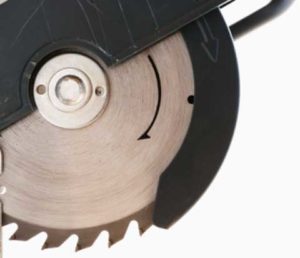 A worker was using a table-mounted router to cut fiberboard. The router didn’t have a guard. So when the material kicked back, his hand slid into the blade and was injured. In a separate incident at the same facility, a different worker was operating a table saw, which also wasn’t equipped with a guard. When the worker passed material over the moving blade, it kicked back, causing his hand to slide into the blade. He also suffered hand injuries. During a follow-up inspection, an MOL inspector saw a worker operating a table saw without its guards adjusted to provide protection from the moving blade. The worker pleaded guilty to failing to ensure that the machine was properly guarded and was fined $2,000. The company pleaded guilty to two guarding violations and was fined $30,000 for each [Canduct Industries Ltd., Govt. News Release, Nov. 23, 2012].