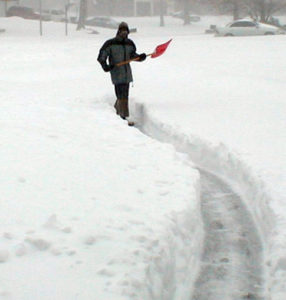 In the winter, in addition to the “regular” safety hazards you must address, you also need to protect workers from the dangers posed by the snow and ice, most notably the risk of slip-and-falls. Although slip-and-falls typically result in bruises, sprains, strains or maybe broken bones, they can cause fatalities.

A doorman in New York City recently died in such a tragic incident.

During a snowfall, he was shoveling the steps of the apartment building at which he worked. But he slipped, fell down the stairs and crashed through a window. The broken glass cut his jugular and he bled to death.

This kind of incident isn’t typical but it is a reminder of the need to take the risk of slip-and-falls in the winter seriously. For example, if you fail to clear a pathway of ice and a visitor slips and falls, your company could be held responsible for the visitor’s injuries under occupier’s liability laws.

And if a worker slips and falls, your company could face a safety violation.

Example: An Ontario steel mill worker was walking along a designated walkway when he slipped and fell on a build-up of ice in a slope across the walkway, sustaining injuries as a result. The steel company pleaded guilty to failing to keep a walkway used by workers free of hazards and/or accumulation of snow or ice and was fined $60,000 [Essar Steel Algoma Inc., Govt. News Release, July 6, 2016].

The OHS Insider has more information on snow, ice, slips-and-falls and other related risks, including:

Want access to all the Canadian safety compliance resources that the OHS Insider has to offer, such as the articles mentioned above, and much more? Sign up for a free trial membership now! [/box]