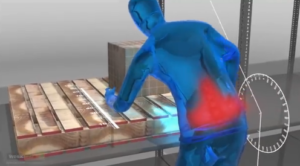 Studies have shown the health risks associated with individuals spending too much time sitting on the job. But a new study has shown that standing for too long at work may not be any better for workers. The study, by researchers from ETH Zurich and the University of Michigan, looked at the long-term effects of muscle fatigue after workers stood for five hours.

The study is important because many workplaces require workers to perform their tasks standing, including retail staff, assembly line workers and healthcare professionals. In fact, the analysis of the European Survey of Working Conditions (2012) found that 47% of employees stand for more than 75% of their work time. And prolonged standing at work has been associated with fatigue, leg muscle pain and backache.

The researchers concluded that five hours of standing has a significant impact on worker fatigue in the lower limbs. Key findings:

Bottom line: Too much sitting or standing isn’t good for workers’ health. Instead, you should strive to strike a balance for workers.

In other words, encourage workers who sit for most of the work day to get up regularly and move around, while encouraging workers who mostly stand to take regular rest breaks. Lastly, encourage all workers to regularly stretch during the day.