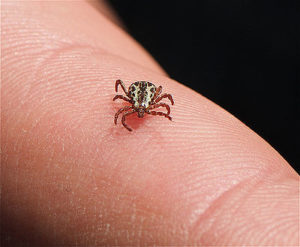 Now that warm weather has arrived again, it’s time for employers with workers who work outside to determine whether these workers are at risk of being bitten by ticks and thus contracting Lyme disease. That’s because ticks are most active during the summer months.

Some of the occupations most at risk of tick bites include:

Preventing tick bites is critical because such bites can transmit Lyme disease. This illness is spread by the bite of an infected blacklegged tick (also called a deer tick) or western blacklegged tick, which are very hard to see and much smaller than the common dog and cattle ticks.

How to Protect Workers

SafeWork Manitoba recommends the following to protect yourself or your workers from tick bites:

If a tick bites you or your workers, the most important thing is to make sure that you remove all of the tick, including the mouth parts that are buried in the skin. Also, don’t squeeze the body of the tick when you’re removing it, which can force its stomach contents into the wound and increase the chance of infection.

Make sure that workers know they should report tick bites to their supervisors. Keep track of any signs and symptoms in bitten workers in the weeks following a tick bite. Signs and symptoms of tick-borne infections may include fever, headache, muscle and joint pains, fatigue, skin rash and swollen lymph nodes.

Employers and workers in Manitoba are encouraged to submit removed ticks to the provincial tick surveillance program. Ticks should be placed in small crushproof bottles (such as a pill bottle) with a piece of slightly damp paper towel to help keep the tick alive. Firmly tape the lid shut. Seal the bottle in a plastic bag and then in a cardboard box labeled “Research Specimens Fragile – Handle with Care” and send to the following address:

Include the following details: name, address and phone number, information about where, when and on whom (e.g., person, dog) the tick was found, as well as any recent travel activity.