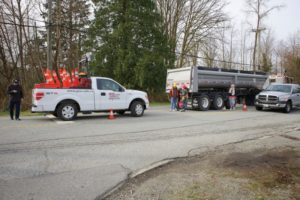 The winter is hard on roads and highways. And the weather makes it difficult, if not impossible, to make the necessary repairs. So now that fair weather is here, road work can commence.

But too many workers have been injured or killed while working on road construction projects, often because they’ve been hit by passing drivers.

Example: Two workers preparing to install an automatic traffic counter activated their work vehicle’s warning lights, stopped in the passing lane, opened the doors and began to prepare their equipment. An approaching pickup truck struck the work vehicle, causing it to spin and strike one of the workers. He died from his injuries.

The Ontario MOL found that the employer failed to ensure the flow of traffic was appropriately controlled with the use of a sign truck equipped with a flashing arrow and properly positioned ahead of the work vehicle. The employer pleaded guilty to a safety violation and was fined $100,000 [Pyramid Traffic, Govt. News Release, Aug. 19, 2013].

So several jurisdictions have recently launched road safety initiatives intended to protect the members of road work crews or issued reminders to motorists to drive carefully near road construction zones.

If your workers are involved in work conducted on or near highways and roads, make sure you take appropriate steps to protect them, such as by implementing a traffic control plan and setting up adequate buffer zones. Here’s a checklist you can use when planning and preparing a traffic control plan to ensure that the plan will effectively protect workers from identified hazards.

It’s especially important to ensure that the workers assigned to control or direct traffic as flaggers, flag persons, signallers, etc. are adequately protected. (Here’s a look at the traffic control person requirements in each jurisdiction.)