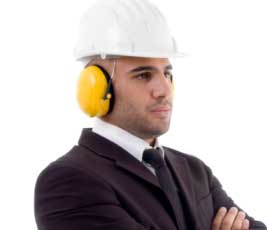 I’m rather leery of safety awards after my encounter with “one of the best worksites to work in Alberta.’’ This company made paving stones, the pretty ones used in gardens. It had won the Merit Contractor’s award for the best plant in Alberta in terms of health and safety.

I was invited to audit the company and went on a tour of their facilities. Several machines are used to stamp the paving stones out of clay and/or a compact mixture and then they’re baked. So the facility was very noisy.

I’m a big fan of hearing conservation programs, which are mandated by the Alberta government as of 2003 for workers exposed to excessive noise. (For more information on hearing conservation programs, see “Noise Control: How to Develop a Compliant Hearing Conservation Plan.”) So I had on ear plugs and a hearing muff. After being in the plant for less than an hour, I left with a raging headache and ringing in my ears. I was less than impressed.

Excessive noise exposure can cause hearing loss, which is irreversible, and tinnitus, which is ringing in the ears. Exposure to high noise levels has also been implicated in other health concerns and can affect mood, eating and sleeping habits.

Management was less than thrilled at my suggestion to get an industrial hygienist to measure the noise levels and make suggestions for dampening the noise. But it did invite the industrial hygienist I recommended in for a preliminary survey. She found that the extruder machine had a decibel level over 120—that’s louder than a jet engine. The workers working on or near this machine were badly overexposed to excessive noise in violation of the OHS law.

I explained to the company that they were in violation of the law and should have a full noise survey done.  In response, the company did absolutely nothing. It didn’t mitigate the noise and, to my knowledge, still have workers exposed to excessive noise levels. But I was told by the head of auditing at the safety association I worked for that I couldn’t fail it for one violation. So the company received its Certificate of Recognition.

Controlling excessive noise is relatively easy to do. Workplaces can use engineering controls such as noise dampening or enclosures to muffle the noise levels. They can also use administrative controls, such as ensuring that workers are exposed to noise only at or below permissible levels. Lastly, companies can provide PPE such as ear plugs or noise-reducing ear muffs if engineering and administrative controls aren’t sufficient protection. But I found that PPE has its limitations.

What did I learn from this episode? Safety awards are in the eye of the beholder. Noise is a fact of life in many industries but it’s just good business for the health and safety of your workers to keep it at safe levels. Hearing loss is permanent and impacts life outside of the workplace. So the workers at this company who could no longer hear the machinery also likely had a hard time hearing, say, raindrops against a window or their child singing a nursery rhyme, sounds that are too precious to lose.

Ms.  Barbara Semeniuk BSc. CRSP is President of Purcell Enterprises Ltd., a loss control management firm that specializes in health and safety auditing, and is a member of the OHS Insider Board of Advisors. If you wish to discuss this article, call her at 780-951-0867 or email her at bls1284@telus.net.