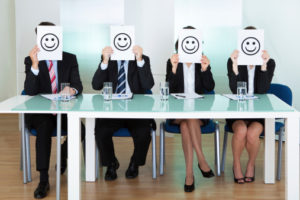 An Ontario employer with a unionized workforce has a joint health and safety committee (JHSC) as required by the OHS law. After expiration of the agreement between the employer and the union governing the JHSC’s terms of reference, the parties can’t agree to new terms. So the employer unilaterally imposes amended terms of reference on the JHSC. The new terms include the following:

Was the employer authorized to set the JHSC’s terms of reference?

A.  Yes, because the OHS law holds the employer responsible for the JHSC and its operation.
B.  Yes, as long as the terms comply with the requirements in the OHS law and don’t impede worker participation in or representation on the JHSC.
C.  No, because it’s a joint committee so the employer and workers (through their union) must agree on the terms.
D.  No, because OHS laws require JHSCs to set their own terms of reference.

B. The employer can set terms of reference for the JHSC’s operations provided that they comply with the OHS law and don’t violate workers’ rights.

This hypothetical is based on an Ontario labour arbitration decision in which the arbitrators found an employer could unilaterally set terms of reference regarding operation of a JHSC provided those rules don’t violate the OHS law or the collective agreement. The collective agreement obligated the employer to comply with the OHS law, which required a JHSC in the workplace. The arbitrators found that the terms generally did so with regard to the number and duration of meetings, and worker representation on the committee. However, the arbitrators declared that provisions limiting the term of worker co-chairs and requiring notice prior to new member appointments unilaterally imposed restrictions that weren’t found in the OHS law and adversely affected workers’ right to choose representatives. Therefore, the arbitrators determined that such terms required union agreement and couldn’t be unilaterally imposed by the employer.

Insider Says: For more information about the operation of JHSCs, go to the JHSC Compliance Centre.

C is wrong because although the law requires the JHSC to be a joint committee including representatives of both workers and management, every decision concerning the committee and its operations doesn’t need to be made jointly. For example, the OHS laws generally require there to be at least as many worker representatives as management representatives on the JHSC. But some jurisdictions let workers have more representatives than management. And the JHSC can decide how it’ll make decisions, such as by consensus, majority vote, etc. In fact, the committee’s terms of reference will typically spell out the requirements and process for making decisions. Thus, if a JHSC’s terms of reference permit decisions by a majority vote and worker members outnumber management members, it could make a decision that isn’t supported jointly by both groups.