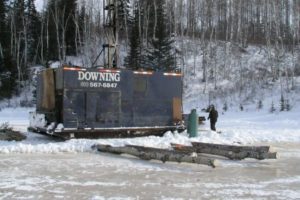 In the winter, most of us avoid the ice unless we’re going skating or playing hockey. But some workers may be unable to avoid the ice—in fact, they may have to cross or actually work on it. Examples of ways workers may encounter ice covers over water on the job:

It’s important that employers of such workers take steps to ensure their safety. In fact, the OHS laws in some jurisdictions have specific requirements for working on ice over water, such as a frozen lake or river.

For example, Manitoba’s OHS regulations cover working on ice in Secs. 22.33-22.37 and address issues such as the use of powered mobile equipment on ice and safe work procedures when using such equipment on ice.

And Sec. 27 of Newfoundland’s OHS regulations says that when a worker must travel over or work on ice over water, the employer must test the ice to ensure that it can support the load placed on it.

Alberta has a best practice guide for building and working safely on ice covers that’s very useful for employers in all jurisdictions whose workers have to work or cross ice. The guide recommends that employers take the following eight steps:

1. Determine the likelihood of the ice cover failing and a person or vehicle breaking through it.

2. Assess the severity of the consequences, such as fatality, loss of property or short-term cover closure and repair, and the likelihood of such consequences (from likely to remote).

3. Classify the risk from low to substantial risk according to both severity and likelihood.

4. Choose a load capacity (and equivalent ice thickness) based on risk level and the hazard controls that’ll be implemented during operations.

5. Eliminate the hazard, such as by choosing another route that doesn’t require an ice cover.

7. Monitor and maintain those controls, such as by monitoring ice conditions and repairing damaged ice.