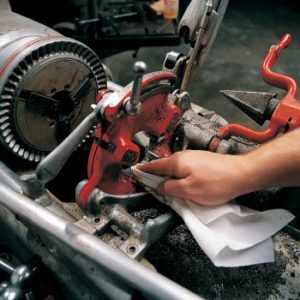 Workers in many industries in Canada, including manufacturing, automotive and printing, use shop towels to wipe parts, spills and even their hands and faces as they work. These towels are laundered and then reused. But are they really clean and safe for workers?

According to a recent study, workers in Canada and the US who use laundered shop towels may be exposed to lead and other metals. And because workers can’t see, smell or feel heavy metal residue on the towels, the risk of exposure to such substances isn’t apparent to them.

For example, workers can inadvertently ingest heavy metals by touching shop towels with their hands and then touching their mouths or by direct contact between the towels and their mouths.

The study estimated worker exposure to 28 different metals in laundered towels collected from 16 Canadian and 38 US companies in various industries. Metal exposure levels were then compared to several toxicity criteria.

The researchers concluded that a worker using a typical number of laundered shop towels each day may ingest an amount of lead 400 times higher than the health-based criterion for reproductive effects set by the California Environmental Protection Agency.

The typical worker may also be exposed to the following metals at unsafe levels:

And even workers using as few as three towels a day were at risk of overexposure to some of the metals, concluded the study.