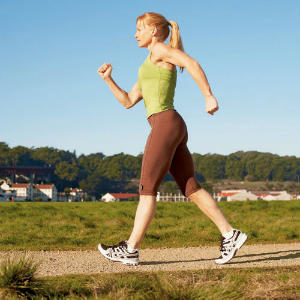 Some workplaces have wellness programs that encourage—and even reward—workers for going to the gym and exercising. But a recent study has found that there are benefits to even easier forms of exercise, such as lunchtime walks.

As reported in the New York Times, the researchers for the study, which was published in the Scandinavian Journal of Medicine and Science in Sports, recruited sedentary office workers at universities.

Potential volunteers were told that they’d need to be available to walk for 30 minutes during their usual lunch hour three times a week. Most of the resulting 56 volunteers were middle-aged women—it can be difficult to attract men to join walking programs.

Cecilie Thogersen-Ntoumani, the study’s lead author and now a professor of exercise science at Curtin University in Perth, Australia, said walking may not strike some men as strenuous enough.

The volunteers completed a series of baseline health and fitness and mood tests at the outset of the experiment, revealing that they were all out of shape but otherwise generally healthy physically and emotionally.

The researchers then randomly divided the volunteers into two groups: one of which was to begin a simple, 10-week walking program right away, while the other group would wait and start their walking program 10 weeks later, serving, in the meantime, as a control group.

To assess the volunteers’ moods, the researchers helped them set up a specialized app on their phones that included a list of questions designed to measure their feelings about stress, tension, enthusiasm, workload, motivation, physical fatigue and other issues related to how they were feeling about life and work at that immediate time.

Then the first group began walking three times a week. Each volunteer was allowed to walk during one of several lunchtime sessions, all of them organized by a group leader and self-paced. Slower walkers could go together, with faster ones striding ahead. There was no formal prescribed distance or intensity for the walks. The only parameter was that they last for 30 minutes, which the volunteers had said would still give them time to eat lunch.

Each workday morning and afternoon during the first 10 weeks, the volunteers in both groups answered questions on their phones about their moods at that particular moment.

After 10 weeks, the second group began their walking program. The first group was allowed to continue walking or not as they chose. (Many did keep up their lunchtime walks.)

Then the scientists compared all of the responses, both between groups and within each individual person. That is, they checked to see whether the group that had walked answered questions differently in the afternoon than the group that had not, and also whether individual volunteers answered questions differently on the afternoons when they had walked compared with when they hadn’t.

The responses were substantially different when people had walked.

On the afternoons after a lunchtime stroll, walkers said they felt considerably more enthusiastic, less tense, and generally more relaxed and able to cope than on afternoons when they hadn’t walked and even compared with their own moods on a morning before a walk.

Although the researchers didn’t directly measure workplace productivity in their study, “there is now quite strong research evidence that feeling more positive and enthusiastic at work is very important to productivity,” Thogersen-Ntoumani said. “So we would expect that people who walked at lunchtime would be more productive.”

In addition, all of the volunteers showed gains in their aerobic fitness and other measures of health at the completion of their 10 weeks of walking.

The biggest obstacle to volunteers’ continuing walking after the experiment ended—management’s expectation that they work through lunch.

Bottom line: Employers’ have a vested interest in their workers’ mental and physical health. Workers need breaks during the workday to recharge. So expecting them to work through their lunch hour, when they should be using that time to refuel, relax or exercise, is unhealthy for both the workers and the organization.

Instead, companies should encourage workers to take these short periods of time to engage in activities that will improve their overall fitness.