Stress from Discrimination Based on Deafness Not Covered by Workers’ Comp 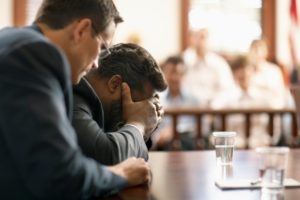 A deaf worker filed a workers’ comp claim for chronic onset psychological stress due to systemic discrimination based on his disability, particularly by his supervisors. The claim was denied, so he appealed. The Appeals Commission acknowledged that the worker was experiencing stress at work. But for stress to be covered by workers’ comp, the worker must have a “confirmed psychological or psychiatric diagnosis as defined in the DSM.” But his doctors diagnosed him as suffering from “Audism,” discrimination based on deafness, which isn’t a recognized condition in the DSM [Decision No: 2014-0147, [2014] CanLII 9012 (AB WCAC), March 4, 2014].