Spot The Safety Violation: Worksite No Place for Balance Beam 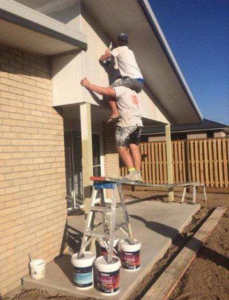 There are so many things wrong with this picture. How many can you name? There’s a place for ingenuity and creativity—but not when it comes to workplace safety.

First, there’s simply no situation in which it’s safe or appropriate for one worker to be sitting on the shoulders of a co-worker. Whether these painters are horsing around or honestly believe this technique is perfectly acceptable, their employer needs to put a stop to it immediately.

Second, the board the painters are standing on probably isn’t wide enough—and certainly is too long to not have some support. Just look at how it’s sagging in the middle. In addition, they shouldn’t be using a stepladder to support this horizontal walkway. And it doesn’t appear that either of the board’s ends are braced or secured. They could easily slip off their supports, causing the painters to fall.

Speaking of falls, although it’s unclear exactly how high up the painters are, it looks like at least the one on top should be wearing appropriate fall protection.

Yes, the painters are working outside in sunny conditions. But a worksite isn’t a beach. So instead of wearing flip flops, the painter on top should be wearing appropriate footwear, such as boots. (Use this checklist to assess whether hazards exist in the workplace that could endanger workers’ feet and, if so, whether those workers are adequately protected from the identified hazards by their footwear.)

Lastly, the stepladder is unsafely balanced on top of four buckets. Instead, the painters should be using a stepladder (or extension ladder) that’s tall enough to give them safe access to the areas they need to reach. And they should ensure that the ladder is placed on flat, even ground.