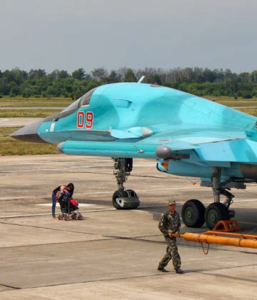 Is this a safe place for a baby—or his/her mother for that matter? The focus of workplace safety is naturally on protecting workers. But it doesn’t end there. Companies also have a duty to take steps to protect the health and safety of visitors to their workplaces. Visitors are particularly vulnerable to getting injured because they’re unfamiliar with the hazards in your workplace and haven’t been trained on how to protect themselves from those hazards.

In this picture, it’s likely that mother and child are there to visit dad at work, which is a nice idea. But perhaps mother and child should’ve waited in a reception area or other safer location. Although this particular plane is parked, there are probably others in the area that are moving around and could easily run over the stroller. And as the bottom right of the picture shows, there are clearly workers in the area doing their jobs, such as moving materials, which could also endanger the mother and child.

The Duty to Protect Visitors

The duty to protect visitors to the workplace comes from three places:

Occupier’s liability laws. Most jurisdictions have so-called “occupier’s liability” laws that impose a duty on the owners or users of property to take reasonable care, under the circumstances, to see that visitors are reasonably safe on the property. (Take this quiz to see if a company can be liable under such laws for an injury to a non-employee caused by an employee’s safety infraction.)

Example: A retired engineer went to the site of a construction project near his home to speak to the workers about the work they were doing and methods they were using. As he was leaving, he fell through an uncovered stairwell opening and was in a coma for six days. When he emerged from the coma, he was left with lingering serious health problems. The contractor in charge of the site where the injury occurred was convicted by a Nova Scotia court of four safety violations. The court ruled that the contractor had a duty to protect the engineer while he was at the worksite [R. v. Tricell Construction Ltd., [2008] NSPC 31 (CanLII), June 11, 2008].

C-45. The Criminal Code as amended by C-45 requires persons who control work to take “reasonable steps” to protect individuals affected by the work. This duty covers not only workers but also visitors. Thus, a company could be liable for criminal negligence if a visitor is killed or seriously injured as a result of a workplace incident that occurred as a result of their “wanton and reckless indifference” to safety.

To protect visitors to your workplace, implement a written visitor safety policy that contains these six key elements: