Spot The Safety Violation: Where There’s Smoking, There Could Be Fire 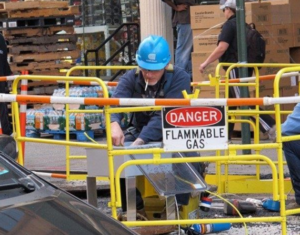 Is this area an appropriate place for a worker to be smoking? It’s been clearly established that smoking is bad for your health and the health of those around you. In fact, smoking is banned or seriously restricted in enclosed workplaces across Canada. But smoking can also endanger worker safety by igniting flammable substances and causing explosions and fires.

The “DANGER: FLAMMABLE GAS” sign in this picture is pretty clear. So why in the world is this worker smoking a cigarette in that area? He probably shouldn’t be smoking while he’s working at all. But more importantly, by doing so in the presence of flammable gas, he’s putting not only his safety at risk but also the safety of those people around him.

And such a reckless act can have serious consequences.

Example: A worker for a floor and window coverings store in Winnipeg was smoking a cigarette when he went to get something from a storage container behind the store. When he opened the container, a propane tank near it exploded. His legs were badly burned in the explosion. The store suffered extensive damage in the resulting fire as did vehicles and a trailer.

Your jurisdiction likely has smoke-free laws that apply to enclosed workplaces. And your jurisdiction’s OHS laws may also bar or limit smoking in the workplace. So to ensure compliance with these laws—and to ensure that smoking workers don’t cause fires or explosions—do the following: