Spot The Safety Violation: What Happened to This Truck Is Shocking 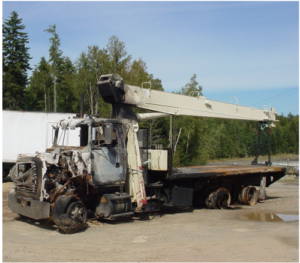 Can you guess how this boom truck ended up in this condition? Overhead power lines pose a hazard to not only workers but also equipment that comes into contact with them. According to a hazard alert from WorkSafeNB, the boom truck in this picture made contact with a 7,200-volt distribution line. The current flowed to the ground through the truck, which caught fire and was completely destroyed—costing the company the loss of equipment worth hundreds of thousands of dollars. Fortunately, no one was hurt in the incident.

Example: A worker in BC was on the ground guiding a mobile crane onto a truck deck when the crane’s boom touched an overhead power line. The electrical current passed through the crane jib that the worker was holding and then passed through him to the ground. He was electrocuted.

In addition, when equipment touches a power line, the current may travel through the equipment to the ground, endangering anyone standing nearby or who tries to come to the rescue.

You should also have safe work procedures for the use of mobile equipment and powered aerial work platforms that covers using such equipment near overhead power lines.

What To Do if Equipment Contacts an Overhead Power Line

If mobile equipment does come into contact with overhead power lines, do the following: