Spot The Safety Violation: What Goes Up Must Come Down 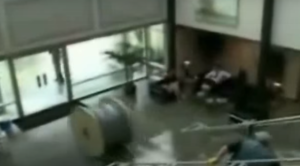 What are the dangers of trying to move this giant spool of wire up stairs in this manner?

However, when these workers tried to move the spool by rolling it up stairs, they endangered not only themselves but also anyone in the area who could’ve been in the path of the runaway spool when they lost control of it. Fortunately, no one was hurt (except the glass door). But they might not be so lucky the next time.

Moving bulky, awkwardly shaped items can be tricky. But with some thought and planning, you should be able to find a way to safely do so.

For example, these workers probably thought rolling the round spool would be easier than lifting the heavy object up and carrying it. And if they were moving the spool on a level surface, rolling it would likely be a perfectly safe technique.

But they were trying to roll the spool up an incline. And you can see the consequences when gravity took over and they lost control of it on this angle. Instead, the workers could’ve turned the spool on its side so it was flat and then carried it that way. Or they could’ve used some sort of mechanical aid. And even better, they could’ve found another way to get the spool where it needed to go, such as by taking it on a freight elevator.

Moving Materials Up & Down Slopes

Pushing any object that’s round or has wheels up or down a slope poses different challenges than moving it on level ground. That’s because the weight of the materials and the force of gravity come into play.

When going down an incline, gravity may make the material move quite easily. In fact, the worker may need to apply force or activate the brakes so as not to lose control of it. But when pushing an item up a slope, gravity works against the worker, forcing him to bear the weight of the item and putting him at greater risk of injury.

To comply with manual materials handling requirements in the OHS laws and protect workers when moving awkward items such as a large spool of wire, take these five steps:

1)      Because the preference is to move materials mechanically, first determine whether you can do so;

2)      If not, assess the risks of moving the materials manually (You can use this checklist for the assessment.);

4)      Develop methods for safely lifting and moving the materials; and