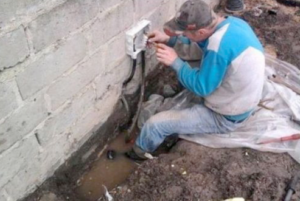 Is this how you want your workers doing electrical work? You don’t have to be an electrical engineer to recognize that it’s not a great idea to repair electrical equipment with one’s feet immersed in a puddle. The worker in this picture was fortunate to survive the experience but others haven’t been so lucky.

Example: While working on a residential pool project, a young laborer was electrocuted after he tried to force a 120V plug into a 240V receptacle while standing in water.

Electrical hazards can cause injuries and deaths to workers. For example, according to a recent report on electrical safety in Ontario, from 2008-2012, there were 25 electrical-related fatalities—15 of which involved workers. Safety incidents tend to be associated with unsafe work practices, according to this report.

And between 2008-2012 in BC, 320 workers were injured or killed by electrical shock or electrocution.

In general, studies have shown that the highest proportion of electrocution deaths is among:

In addition, electrical-related fatalities are more common among young workers. And contact with overhead power lines is reportedly by far the most frequent cause of fatal occupational electrocutions.

Electrical equipment is very dangerous on its own. Water or wet/moist conditions heighten that danger. For example, after a flood, the risk of electrical shock is a common and serious safety hazard.

DON’T run extension cords across doorways or under carpets

DO replace or repair damaged or loose electrical cords

DO use ground-fault circuit interrupters when working in damp locations

DO call the electric company immediately to report downed lines