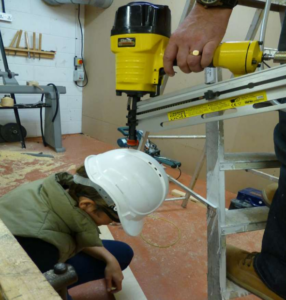 Where should this worker’s finger be while he’s carrying around this nail gun? Nail guns are very useful power tools, letting workers nail together materials more quickly than they could by using a traditional hammer. But nail guns—like handguns with bullets—can endanger workers if they aren’t used properly. For instance, nail guns with contact and single actuation triggers will fire if the trigger is being held and the safety contact tip gets knocked or pushed into an object or person by mistake.

In this picture from the Health and Safety Executive in Great Britain, a worker is carrying around a nail gun with his finger on the trigger. Because he isn’t actually using the nail gun, there’s no reason for his finger to be on the trigger right now. And because it is, he could easily shoot his co-worker—or himself.

Example: A worker in Alberta was walking while carrying a pneumatic nail gun. His finger was on the trigger. The end of the nail gun rubbed against the side of his leg, shooting a nail into his lower leg. He was transported to the hospital for treatment, remaining there for more than two days.

Bottom line: Your finger should only be on the trigger of a nail gun when you’re actually using it. Don’t walk around the workplace with your finger on the gun’s trigger.

To ensure that your workers don’t get injured—or injure someone else—when using nail guns, OSHA recommends that you take these six steps:

Step #1: Use full sequential trigger nail guns. Full sequential trigger nail guns are the safest. They will only fire a nail when the controls are activated in a certain order. First, the safety contact tip must be pushed into the work piece, then the user squeezes the trigger to discharge a nail. Both the safety contact tip and the trigger must be released and activated again to fire a second nail. It reduces the risk of unintentional nail discharge and double fires—including injuries from bumping into co-workers.

Step #2: Establish nail gun work procedures. Develop nail gun work rules and procedures to address risk factors and make the work as safe as possible. Here are some rules you might want to include in yours:

Step #3: Provide training. Both new and experienced workers need safety training to learn about the causes of nail gun injuries and specific steps to reduce them. Be sure that training is provided in a manner that workers can understand. (For example, use this comic book-style guide on nail gun safety from NIOSH.) Here’s a list of topics for training:

Step #5: Encourage reporting and discussion of injuries and near misses. Studies show that many nail gun injuries go unreported. So ensure that your policies and practices encourage reporting of nail gun injuries as well as near misses, such as nail gun misfires. Reporting helps ensure that workers get medical attention. It also helps you identify unrecognized safety risks that could lead to additional injuries if not addressed. Plus, injuries and near misses provide teachable moments that can help improve worker safety.

Step #6: Provide first aid and medical treatment. Workers should seek medical attention immediately after nail gun injuries, even for injuries that appear to be minimal. Studies suggest that 1 out of 4 nail gun hand injuries can involve some type of structural dam­age such as bone fracture. In addition, materials such as nail strip glue or plastic, or clothing can get embedded in the injury and lead to infection. Plus, barbs on the nail can cause secondary injury if the nail is removed incorrectly. So leave the nail in place and let medical professionals remove it.