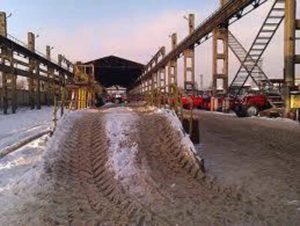 What should’ve been done to make this incline less hazardous? Inclines such as the ramp in this picture always pose more of a slip-and-fall hazard than the level ground. That danger is magnified when the ramp is covered in snow. Although it appears that the ramp was at least sanded, shoveling the snow to remove it entirely is still the preferable safety measure.

Maybe the employer thought that the powered mobile equipment apparently using this ramp was capable of safely using the incline despite the snow. But even these heavy machines could slide while using the snowy ramp, endangering the workers operating the equipment and any bystanders. (To protect workers in such situations, ensure that this equipment complies with the rollover protection requirements.)

And even if the snowy ramp was safe for machinery, workers may also use the ramp and the platform it leads up to, which is covered in snow, too. And the sanded snow may not give them enough traction to safely navigate the incline.

That’s why it’s important after a snowfall to have workers shovel snow from all areas of the workplace used by workers, visitors and equipment, such as paths, the entrance, the parking lot and loading docks. And don’t forget ramps and inclines—whether used by machinery or people—such as a ramp for wheelchair access.

Workers should use proper snow shoveling techniques to avoid injury and heart attacks.