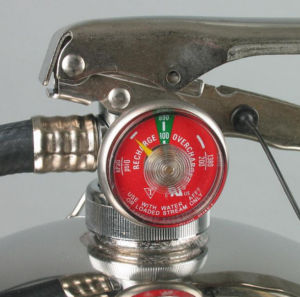 If a fire broke out in your workplace, how useful would this fire extinguisher be? Oct. 9-15, 2016 is Fire Prevention Week in Canada. Although this week is geared toward fire safety at home, it’s still a good time to assess the fire prevention and safety measures in the your workplace, too.

For instance, if there’s a fire, especially a small one, it’s important to have fire extinguishers available in the workplace. But these basic pieces of safety equipment are useless if they’re empty like the one in the picture.

Example: A fire broke out in the bedroom of a Toronto woman’s apartment. The woman’s uncle tried to use one of the fire extinguishers on the building’s floor but it was almost empty and only discharged for a few seconds. The uncle ended up suffering second-degree burns trying to fight the fire, which quickly spread through the entire apartment.

According to Fire Prevention Canada, fire extinguishers contain agents such as a dry chemical, foam, carbon dioxide or water. They’re designed to put out small fires—not large ones.

Extinguishers are labelled A, B, C or D. Makes sure that your workplace has the appropriate extinguishers for the types of fires most likely to occur in it:

A multi-purpose dry chemical labelled ABC puts out most types of fires, including those involving wood, paper, cloth, flammable liquids and electrical fires.

Pull the pin. Some units require the releasing of a lock latch, pressing a puncture lever, inversion or other motion.

Aim the extinguisher nozzle at the base of the fire.

Squeeze or press the handle.

Sweep the extinguisher from side-to-side at the base of the fire, discharging its contents.

Other important facts about fire extinguishers:

Lastly, make sure that your emergency exits and fire doors aren’t blocked.