Spot The Safety Violation: Make Sure Machine Guards Are Effective 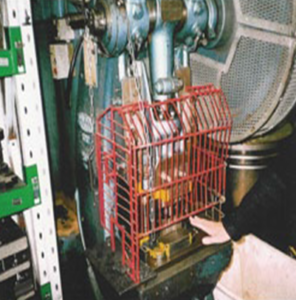 This mechanical power press has a guard. But how effective is the guard at protecting workers? Machinery and equipment pose serious safety hazards to the workers who operate them. For example, if they aren’t adequately guarded to protect workers from accessing pinch-points, energized parts and other hazards, workers who contact these hazards can lose a finger, limb or even their lives.

The mechanical power press in this picture has a frontal machine guard that’s supposed to prevent workers from reaching into the point of operation, that is, the area where the material is placed so it can be cut, stamped, sheared, etc. But the guard isn’t narrow enough to actually keep a worker from reaching into this hazardous location.

Unfortunately, the guard’s shortcomings resulted in a press operator losing his hand after reaching into the poorly guarded machine.  This photo was taken by an OHSA inspector in the US after that incident.

But such incidents are hardly limited to the US.

For example, after a printing press jammed, workers shut it down and engaged a safe button to prevent it from restarting as they looked for the jam. A summer student found a jam in the rear of the press and started to remove it, out of sight of the other workers who’d found another jam in the front of the press. When the workers restarted the press, the young worker’s hand was drawn between two rollers and injured.

The Ontario MOL found that the area of the press where the incident occurred was protected by a guard but it was inadequate to prevent the worker’s hand from being drawn into the rollers. The company pleaded guilty to a guarding violation and was fined $60,000 [American Color Graphics Inc., Govt. News Release, June 11, 2012].

3.  Don’t create new hazards.A guard’s purpose is to protect workers from machine hazards—the guard itself shouldn’t endanger workers or create new hazards. For example, a guard that protects a worker from a pinchpoint could also force him to work in an awkward position, thus exposing him to the risk of developing a musculoskeletal injury.

4.  Don’t interfere with workers’ use of the machinery or equipment.An appropriate guard effectively protects workers from hazards without interfering with the way they do their work. Workers should still be able to do their work quickly and comfortably on a properly guarded machine.

5.  Are difficult, if not impossible, to remove.Workers may be tempted to remove a guard if they think doing so will allow them to work faster or more easily. But removing a guard endangers workers. That’s why many OHS laws specifically say that, when practicable, guards should be designed so that they can’t be removed or can only be removed with tools. (And you should specifically bar workers from removing machine guards except under designated circumstances.)

6.  Allow for routine maintenance on the machinery without removal of the guard.Once a guard is in place, it’s best that it stays in place. If a worker has to remove a guard every time he oils or repairs the equipment, there’s always a chance he’ll forget to replace it when he’s done, thus exposing himself and his co-workers to the risk of injury. So if possible, choose a guard that permits repairs, lubrication and other routine maintenance tasks to be done while the guard is in place.

Adapt and use this Machine Guarding Checklist to ensure that your machine guards meet all of the requirements in the OHS laws, including the design requirements.

The OHS Insider has additional articles, tools and other resources that can help you ensure that workers are safe when using, repairing or otherwise operating the machinery and equipment in your workplace, including :