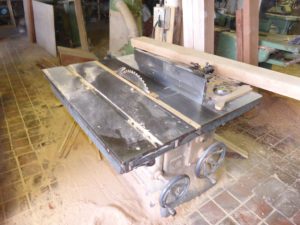 What key safety measures are missing from this circular saw? Various pieces of machinery and equipment can pose safety hazards to the workers operating them. Take saws for example. The blades that are used to cut wood, metal and other materials can easily cut off a worker’s fingers, hands or other limbs. That’s why proper guarding to keep workers from coming into contact with saw blades is so important.

This picture from the Health and Safety Executive in Great Britain shows an unguarded circular saw in the workplace of a gate manufacturer.

It’s bad enough that the manufacturer didn’t have appropriate guards on this and other saws, thus endangering its workers. But after inspectors spotted the unprotected saws during an unannounced visit, they issued a Prohibition Notice barring use of the saws until guards had been fitted. However, when HSE inspectors returned to the workplace a month later, they found the saws still in use—and the manufacturer had made no attempt to fit guards on the equipment.

As a result, the manufacturer was fined £10,000 for ignoring a formal warning about installing guards on two circular saws.

The manufacturer—and its workers—were lucky that no one had been hurt by the unguarded saws. But others workers operating similarly unguarded equipment haven’t been so lucky.

To avoid being hit with a compliance order like the British manufacturer, ensure that your saws and other machinery with pinch-points or other hazards are properly guarded. To do so, you should generally take the following steps to comply with the guarding requirements in the OHS laws:

The British manufacturer made another mistake—ignoring the safety inspectors’ order. If a safety inspector issues an order to your company requiring it to take certain action, such as installing guards on a piece of machinery, it should promptly comply if it thinks the order’s valid.

But if your company disagrees with a safety order, it can’t take the law into its own hands and unilaterally decide that order is invalid and thus can be ignored. Deliberately disobeying or ignoring a safety order is itself an OHS violation—and a very serious one. Instead, your company should follow the jurisdiction’s appeals process for challenging the order.