Spot The Safety Violation: Get Me a Pry Bar! 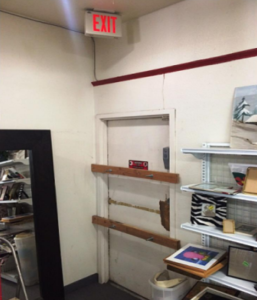 If a fire, explosion or other emergency occurred in this workplace, how exactly would workers be able to exit through this door? Employers must plan for a various emergencies, including fires, explosions, extreme weather conditions and workplace violence, such as active shooter incidents. A critical part of emergency planning is ensuring that workers can safely get out of the workplace if there’s an emergency within it.

For instance, this photograph from the US Naval Safety Center shows an exit in a thrift store that’s essentially been rendered impossible to use. After all, in an emergency, workers probably wouldn’t have time to pry off the boards blocking this exit door.

Fortunately, emergencies are rare. But when they do happen, blocking access to exits—emergency or otherwise—can prevent workers from escaping, trap them inside and seriously endanger their lives:

Providing accessible exits is just one of the things you must do to protect your workers in the event of fires and other emergencies. The OHS Insider has additional information, tools and resources to help your emergency planning, including: