Spot The Safety Violation: Don’t Try to Escape Through Here 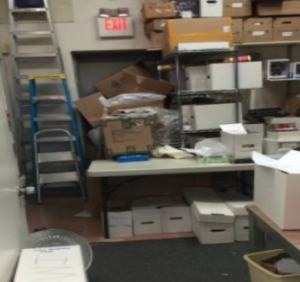 In a fire or other emergency, what’s the likelihood that workers would be able to get out of this door in time to avoid injury—or worse? The OHS laws require employers to plan for a wide-variety of workplace emergencies, including fires, explosions, serious safety incidents and extreme weather conditions, such as tornadoes and hurricanes. One thing that employers must do to fulfill those requirements is ensure that workers can safely get out of the workplace in the event of an emergency, such as by keeping exits clear of obstructions.

Blocking worker access to exits—emergency or otherwise—can prevent workers from escaping, trap them inside and seriously endanger their lives.

It’s easy to assume that you’ll never really need to use emergency exits and so treat these areas as additional storage locations.

But look what can happen when people do need to use exits and can’t:

Keeping exits clear of obstructions is just one of the things you must do to protect your workers in the event of fires and other emergencies.