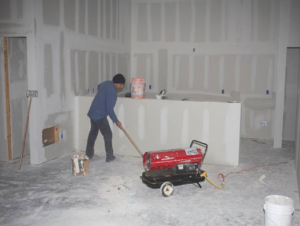 This worker should be warm while he works. But is he exposing himself to another safety hazard besides cold stress? Working in the winter—even inside—may expose workers to the risk of cold stress. So taking steps to keep workers warm is not only reasonable but necessary. Providing portable heaters is a reasonable step to take—but only if they’re used safely.

In this picture from elCOSH, the portable heater is being used indoors and it’s unclear whether there’s adequate ventilation in the space. As a result, the worker could be exposing himself to carbon monoxide (CO) poisoning.

Depending on the level of exposure to CO, workers can suffer from:

For example, WorkSafeBC recently issued a hazard alert on three construction workers who had to be treated for CO poisoning as the result of the improper use of a gas-powered heater they were using to warm a building that was under construction.

Those workers were lucky but others weren’t so fortunate:

Employers should do the following to protect workers from CO poisoning:

1.  Install and properly maintain an effective ventilation system that will remove CO from work areas or require workers to use appropriate respiratory protection.

2.  Maintain equipment and appliances that can produce CO, including not only space heaters but also water heaters and cooking ranges, in good working condition to promote their safe operation and to reduce the formation of CO.

3.  Always install and use equipment according to the manufacturer’s instructions.

4.  Consider switching from gasoline-powered equipment to equipment powered by electricity, batteries or compressed air if it can be used safely.

5.  Bar the use of gasoline- or propane-powered equipment in poorly ventilated areas.

6.  If workers are working in confined spaces where the presence of CO is suspected, ensure that they test for oxygen sufficiency before entering.

7.  Monitor the air in areas where CO may be present, including confined spaces, to ensure that CO levels remain within occupational exposure limits.

10.  Educate workers about the sources and conditions that may result in CO poisoning as well as the symptoms and control of CO exposure.

Also, make sure you comply with the portable heater requirements in the OHS regulations in your jurisdiction. For example, don’t place space heaters by flammable or explosive materials.

Workers can take the following steps to protect themselves from CO poisoning:

1.  Report any situation to your employer that might cause CO to accumulate.

2.  Be alert to ventilation problems—especially in enclosed areas where gases from burning fuels may be released.

3.  Avoid the use of gas-powered engines, such as those in heaters and forklifts, while working in enclosed spaces.

5.  Avoid overexertion if you suspect CO poisoning and leave the contaminated area.

6.  Tell your doctor that you may have been exposed to CO if you get sick.