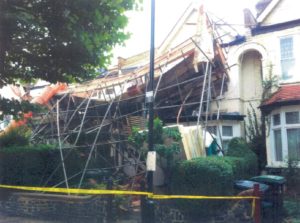 What did the employer and workers do wrong to cause this scaffold to collapse? When built correctly, scaffolds are generally safe for workers to use. But even a well-constructed scaffold can become hazardous if it’s overloaded.

This picture from the Health and Safety Executive (HSE) in Great Britain shows what can happen when a scaffold is loaded beyond its maximum load capacity.

A loft conversion company was fined after a worker was injured in this dramatic scaffold collapse. The structure buckled, tipped towards the home and bent in on itself, effectively creating a chute that sent the worker and an array of materials crashing six metres to the ground below. The 24-year-old worker broke two ribs in the fall, but was fortunate not to have been more seriously injured or even killed.

An HSE investigation into the incident found that the weight of the materials on the scaffold at the time of collapse was between 3-3.5 tonnes—the equivalent of a transit van. This weight was far greater than the scaffold could safely handle and so it gave way.

In addition, the employer should’ve known the property required a scaffold built to an approved design by a specialist structural engineer. It pleaded guilty and was fined £5,000 ($9,425 CD).

After the hearing, HSE Inspector Simon Hester said, “The collapse would not have occurred had the scaffold been designed by a competent specialist to carry loads of 3.5 tonnes with an overhanging cantilever to accommodate the bay window.”

There are two lessons from this British safety incident:

Make sure that the scaffold can carry the load or weight expected to be placed on it. Otherwise, the scaffold could collapse as it did in this incident. (See this chart for the specific load requirements for scaffolds under each jurisdiction’s OHS regulations.)

The basic rule is that a scaffold should be:

When calculating the load that’s likely to be on a scaffold, consider the weight of all the scaffold’s components combined with the following loads that will be or are likely to be imposed on it:

To ensure that workers don’t overload a scaffold, they need to know its load limits. A good way to ensure they have this information is to post the load limits on the scaffold itself.

To learn more about ensuring scaffolds are safe for workers to use, read about the seven steps to take to comply with the OHS requirements for this equipment.