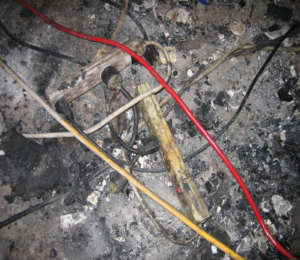 Any ideas how this fire started? Could it be due this mess of connected extension cords? Extension cords are very useful in the workplace because they provide easy access to electrical outlets that workers can use to power tools, lights and other equipment.

But daisy chaining—that is, connecting two or more extension cords or power strips together to gain additional outlets and/or length—is a very bad idea because it can overload circuits and cause fires, especially if you mix extension cords and power strips.

For example, this picture shows the aftermath of a fire—and it’s likely cause.

To avoid electrical fires and other hazards related to extension cords, make sure that your safety training addresses such hazards. For example, the Texas Department of Insurance Division of Workers’ Compensation has compiled some useful dos and don’ts for safely working with extension cords:

You may also be able to protect workers when using extension cords by implementing an Assured Grounding Program. As explained in WorkSafeBC’s Working Safely Around Electricity, the purpose of an Assured Grounding Program is to ensure that the black wires (hot), white wires (neutral), and, in particular, green wires (ground) of extension cords and power tool cords are properly connected by testing every extension cord and power tool when it’s first put into service, following repairs and every three months.

For example, a new extension cord tested on Feb. 8 will have a red tag at the male plug. The extension cord must be retested and marked with a white tag during April.