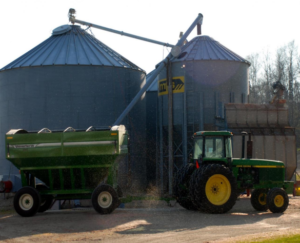 These grain silos pose a serious safety hazard to the workers on this farm. Do you know what it is? March 13-19, 2016 is Canadian Agricultural Safety Week, which is aimed at raising awareness of health and safety issues on farms and ranches. Why is a whole week devoted to safety in this industry sector? Because agriculture is one of the most hazardous industries for workers.

Workers on farms and ranches face many types of safety hazards, from entanglement in farming equipment and rollovers in powered-mobile equipment such as tractors to being trampled by farm animals.

For instance, the grain silos in this picture may look innocuous at first. But they are, in fact, confined spaces and so expose workers to various safety hazards, such as the risk of exposure to toxic atmospheres and the risk of engulfment in the grain contained in the silos.

Example: A 35-year-old farm worker in Alberta entered a silo to chip down cattle grain stuck to its walls, while a co-worker stood outside to shovel out the fallen grain. But when his co-worker left briefly to get a longer pole, the grain collapsed onto the worker, smothering him to death.

The silos in the picture would be considered confined spaces under the OHS laws across Canada because they:

Because the silos are confined spaces, the OHS laws would require employers to take measures to protect any farm workers when working in these silos, such as the following steps:

Step #1: Identify confined spaces, such as tanks, silos, ditches, excavations, etc., so you can ensure that you have the appropriate safety measures in place for work in such spaces.

Step #2: Assess the hazards related to those spaces—such as engulfment or inadequate oxygen levels—and implement appropriate safety measures to address the identified hazards.

Step #4: When workers enter a confined space, there should be a standby person or confined space attendant there to monitor the work and conditions or to summon help if necessary.