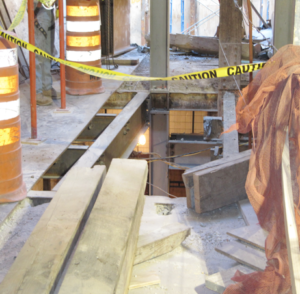 Is caution tape sufficient protection around this floor opening? Employers have a duty to protect workers from not only falls from heights, such as roofs or scaffolding, but also falls through openings in floors and walls.

This picture from elcosh shows a large floor opening at a construction site that’s guarded by nothing but yellow caution tape. Although such tape might warn workers of the opening’s presence, it would hardly prevent them from falling through it and suffering serious—if not fatal—injuries.

In addition, the materials lying near the edge of this hole could easily fall through it, striking someone below.

Floor openings can be a common hazard on construction sites but those workplaces aren’t the only ones where this hazard may exist.

Example: While a stagehand was working during a changeover in shows at Winnipeg’s Centennial Concert Hall, he fell more than three metres through an unguarded opening into an area below the stage and was injured. As a result, the orchestra pleaded guilty to a safety violation and was fined $5,000 [Winnipeg Symphony Orchestra, July 11, 2014].

Skylights in particular pose a serious hazard because although they’re covered openings, such coverings can’t usually support the weight of a worker.

Example: A worker walking backwards on a roof tripped on the flashing of a skylight and fell through it about 5.5 metres to the concrete floor below. He died from his injuries. There were no guardrails around the skylights and the skylights themselves didn’t constitute a compliant protective covering over the roof openings. Plus, the worker wasn’t using any form of fall protection. The employer pleaded guilty to failing to ensure that a guardrail or protective covering was used to prevent workers from falling through the skylights and was fined $100,000 [APCO Industries Co. Ltd., ON Govt. News Release, March 21, 2013].

Take 4 Steps to Protect Workers from Falls Through Openings

The OHS regulations in every jurisdiction require employers to protect workers from falls through openings, usually in the fall protection section. Although the specific requirements may vary, you should generally take the following four steps:

Step #1: Identify hazardous openings. Start by identifying any openings in floors, roofs, walls, work platforms, etc. through which workers could fall. The fall protection requirements typically apply only to openings big enough that a worker could fall all or partly through them. The opening depicted in this picture is a good example of a hazardous opening that would be covered by these requirements.

Step #2: Install either guardrails or coverings. The two basic safeguards for openings are guardrails and covers. Guardrails are generally the preferred method of preventing falls through openings because they’re more obvious and visible than covers and are harder to remove. The OHS regulations usually include detailed requirements for guardrails around openings, often depending on the type of material the guardrail is made of, such as wood or wire rope. One thing is clear—yellow caution tape doesn’t count as a compliant guardrail.

If you can’t use a guardrail around an opening, you must cover it. The OHS laws generally require covers to be:

Step #3: Develop a hazardous openings policy. Create and implement a policy on hazardous openings, as either a stand-alone document or part of your company’s overall fall protection program. This policy should cover, at a minimum:

Step #4: Train workers. As with all safety policies, you should train workers on your hazardous openings policy, covering:

In addition, ensure that workers wear appropriate fall protection when working around or near hazardous openings.